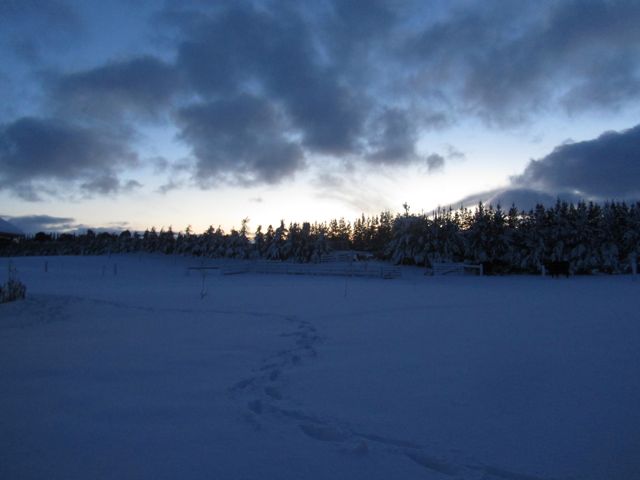 A father walked through a blizzard for 25 kilometres to get help for his wife and toddler after their car got stuck in heavy snow in south-east NSW earlier this week.

Police said the family “were ever so lucky” to survive more than a day in freezing conditions at the Goobragandra Wilderness Area in Kosciuszko National Park.

The 37-year-old Canberra man, who police said declined to be identified, his wife, 39, and their 18-month-old son were travelling in a car on a forested track in the national park when they were caught in a heavy snowfall about 3pm on Wednesday.

The car became stuck in the mud and without mobile phone reception, the family decided to spend the night there, Cootamundra Local Area Commander Superintendent Peter Wanczura said.

“They were able to get water by putting the empty baby bottles on the car roof overnight and hanging the empty nappy bag in a tree,” he said.

The father left the car the following morning, telling his wife and son to stay in the car while he went raise the alarm.

“It’s been raining here quite heavily for a number of days … it was not a very inviting environment,” Superintendent Wanczura said.

In “blizzard conditions”, he trudged through the bushland and mud, sticking to the roads as much as he could before finally being able to make a call from his mobile phone about 2pm.

He then came across a group of forestry workers about 3pm. They took him to Tumut Police Station, where he was given a fresh outfit from St Vincent de Paul to replace his wet clothes, which were saturated with rainwater, mud and snow, Superintendent Wanczura said.

A search involving Forests New South Wales, National Parks and Wildlife Service, New South Wales Ambulance Service and State Emergency Service officers was launched to find the car and at 4.30pm, the mother and her baby were located safe and sound.

“Even though they were a little cold and running low on nappies and baby formula they appeared to be suffering no ill effects,” Superintendent Wanczura said.

He said while vehicles often got bogged in mud and snow or slip off the roadways at the ranges in the area, incidents such as the one involving this family were rare.

“It is also important to have the right equipment with you in terms of food and clothing.”

“This family were ever so lucky and this incident should serve as a reminder that if you are heading into the high country, even for a day trip – be aware of the conditions, the weather report for the day, tell someone where you are going and when you are likely to be back,” Superintendent Wanczura said, adding that people should be aware that mobile phone reception in the high country was patchy.

He said the family suffered from cold, hunger and shock but were otherwise not hurt by their ordeal.