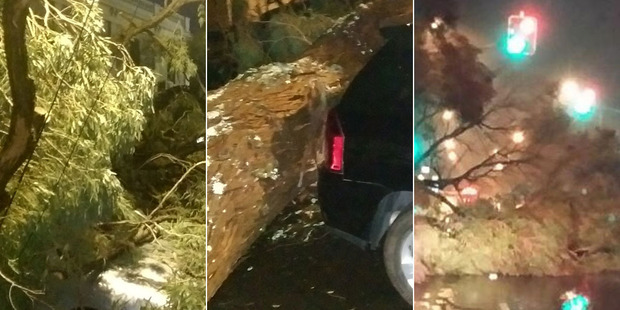 Wild winds and heavy rain overnight has left a trail of destruction in Auckland, Northland and the Coromandel, with surface flooding, falling trees, roofs ripped off and power outages to 48,000 homes.

One child was taken to hospital with minor injuries after a tree smashed through a roof in Manly, Whangaparaoa, about 1.10am.

But the worst is over and the storm is expected to have moved south past Auckland by 7am this morning.

Emergency services overnight were overwhelmed by more than 600 calls since midnight, while Auckland city streets are littered with debris.

A Toll truck and trailer tipped at 3am on the Harbour Bridge when the winds were at their peak. The Bridge was closed for a time but has now reopened.

Vector crews have worked throughout the night to attend to numerous faults after two huge wind blasts up to 145km/h swept through the city, one at 11pm last night and another at 1am.

There were 78 current outages across Auckland at 3.30am this morning, with about 50,000 customers without power.

One of the Vector crews had a lucky escape when a large tree came down next to their truck, trapping the vehicle.

The NZ Transport Agency said that access to the Auckland’s Northwestern Motorway at Great North Rd is blocked because of fallen trees on Great North Rd at Waterview.

Drivers are advised to use the Rosebank Road and St Lukes Road interchanges as alternative routes to and from the motorway.

Lines crews are working to restore power to 20,000 homes across Auckland.

But Vector’s Sandy Hodge says conditions remain dangerous and their safety is the top priority.

“Crews are continuing to work although their safety obviously is paramount and it’s been really windy.

“So it’s not been that safe going up ladders and of course we look after the safety of the crew at all times.”

She says a huge blast of wind came through around 11pm, followed by another massive blow at 1am.

“There was a palm tree that crashed over outside North Shore Hospital. It took lines down and another of our faults crews was out and a tree came down as they were working and it’s trapped their vehicle, so a very lucky escape.”

Hodge says the crew’s been picked up by another truck and they’re not injured.

Meanwhile, Hodge is reminding Auckland residents not to try to get debris out of power lines.

“Everybody please stay safe. Don’t try and do anything you shouldn’t be doing if there’s trampolines in lines, just call the call centre and we’ll deal with it.” 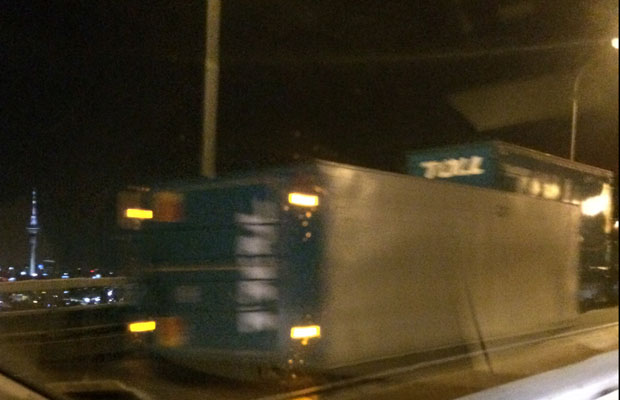 A motorist took this photo of the Toll truck on its side after it was hit by a wind gust on the Harbour Bridge.

The Auckland Harbour Bridge is now open to all traffic including heavy trucks.

It had earlier been closed due to ferocious winds, making the structure move.

NZTA’s Ewart Barnsley says lanes one and two southbound are still closed because of the trailer of a Toll Transport truck that rolled just before 3am – it’s still blocking the clip-on.

There’s also a north-western motorway off ramp closed both ways after two trees fell – one after the other – blocking the Waterview access at Great North Road.

“Even though it seems that the worst of the storm may have passed, we’re just asking drivers to take extreme care.

“Driving’s going to be a bit of a challenge getting into work this morning.”

Ewart Barnsley says that means keeping a good following distance, lights on, and speed down.

Roads and bridges around the country have been closed overnight, with heavy rain causing high river levels and surface flooding.

Closures and warning signs are also in place, around Omaka, Opawa and Taylor Rivers and Awatere Valley in Marlborough.

Waimakariri District’s Emergency Operation Centre has been activated, and road snowfall warnings have been in place for Lindis Pass.

Flooding is also affecting the Coromandel on State Highway 25 south of Whitianga, also at Duck Creek before Tairua and on the thames Highway south of Thames.

All roads are currently open but Police are advising motorists to take care and drive to the conditions.

Last night Waikato police issued a warning to motorists after the death of an 80-year-old woman struck by a car as she walked across a pedestrian crossing near Ngaruawahia yesterday morning.

Mrs Grace said it was too early to know what caused the incident which led to the pedestrian’s death, but everyone needed to be alert because of the weather.

“This week is probably the busiest period on Waikato roads of the year and the forecast is for rain and poor visibility.”

The complicated nature and small size of the low pressure system means rainfall may be intense for some, but only drizzly for others – as happened yesterday.

In some of the worst flooding, emergency services helped evacuate 21 elderly dementia patients from a flooded North Canterbury rest home.

The residents spent last night in an emergency welfare centre after a torrential downpour caused a stream behind Bainlea House to breach its banks.

Civil Defence response teams pumped water from houses in the area. Residents waded through flooded streets in an attempt to unblock drains, while children played on inflatable dinghies.

Flooding closed the Rangiahua bridge on State Highway One at Horeke in Northland last night.

State Highway 10 near Kaeo in Northland was also affected by flooding and restricted to one lane.

“With night falling so quickly at this time of year, it is a case of expecting the unexpected particularly in rural areas with little street lighting.

“People should drop speeds and increase following distances to reduce the risk of a crash if a vehicle ahead has to brake suddenly.”