Auckland ‘showdown’ over as Kauri saved 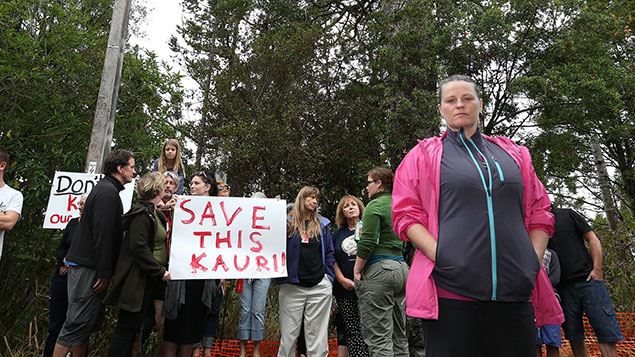 The 500-year-old Titirangi kauri tree at the centre of a showdown has been saved by the owners.

Pressure has been building on the property developers and Auckland Council for the past three days as politicians, councillors and protestors from around the country put their hands up to save the ancient tree.

New Lynn MP David Cunliffe, who was planning to scale the tree in protest, says it’s possible the issue could be resolved today.

“The mayor has met with the landowner Linehan and it appears some solutions may be possible.”

“When still need to see the detail, and we expect some comment this morning.”

Save the Kauri Spokesperson Aprilanne Bonar is paying tribute to the owners.

“We’re very grateful to John and Jane to start the conversation, to have come forward and assured that the trees will be saved.”

“There are a number of other conditions that need to be met but this is a great first step.”

The kinks in the debate around what will happen to the land now the kauri has essentially been saved, will be ironed out this morning.

Protestors are heading to Auckland Council’s development committee meeting to have their voices heard, and Len Brown is expected to make a statement on the council’s position.

She believes the letter isn’t totally clear that the house and driveway will be shifted to save the tree.

“He’s opened a whole lot of possibilities and I think he’s hinting that he might want council to buy the land.”

Hulse says the issue is on a more positive footing than it was yesterday.

“I don’t think it’s quite over yet but it’s certainly on a more positive footing than it was yesterday.”

Earlier, the government said it wasn’t involved, but the Greens said it should to bear some of the blame for the Titirangi tree conflict.

Environment Minister Nick Smith insisted the Government wouldn’t intervene and maintained the situation is the responsibility of the Auckland Council.

But Green MP Eugenie Sage claimed the Government is liable.

“Changes to the RMA have reduced public participation, and in this case interest groups and members of the public haven’t been able to have a say.”

“It’s applications were not notified, there was no opportunity for the Waitakere Ranges protection society and interested members of the public to have a say.”

and rightly so it should be saved as aucklanders are vocal when other areas cut down natives……so doesnt it look some what two facedacegh when you cut down natives in your own back yard GRRRRRRR  some areas in NZ they stop you from cutting scrub!!!!!!!!!!