Atu: Too close for comfort + latest maps and stats 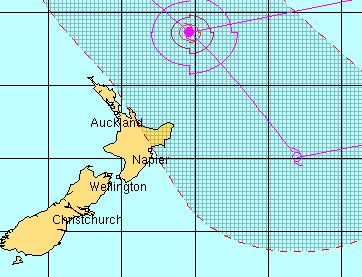 Severe tropical cyclone, the fifth named storm to enter New Zealand waters this summer, is going to track very near to the North Island – but not near enough to cause problems predicts WeatherWatch.co.nz.

The cyclone, which today reached Category 4 status, is on a path that will see it track close to the North Island’s east coast.

Head weather analyst Philip Duncan says the storm is especially nasty and some will consider it’s close track to New Zealand a little too close for comfort following the devastation in Australia this summer.  “We still believe Atu will be too far to the east to bring severe weather to New Zealand but it’s certainly going to track very near us.  It’s a lucky thing that New Zealand is so narrow otherwise this summer would’ve been devastating”.

The width and angle of the North Island means many severe storms narrowly miss us.  “Unlike somewhere like Queensland, which is a big wide body of land, the upper North Island and East Cape are both narrow”.

Mr Duncan says the long range models this summer have been incredibly accurate.  “People often ask me where forecasts are getting more accurate and this is one main area.  10 years ago models were not this accurate but these days we can see a large low forming and call it over a week in advance”.

WeatherWatch.co.nz was the first forecaster a week ago to predict this week’s cyclone based on modelling data from Europe.  The weather news authority was also the only one to predict Atu reaching category 4 status, while government forecasters in the South West Pacific were predicting cat 2 as a maximum strength.

This afternoon the Joint Typhoon Warning Centre shifted their predicted track even closer to New Zealand – the second time this has happened this weekend. 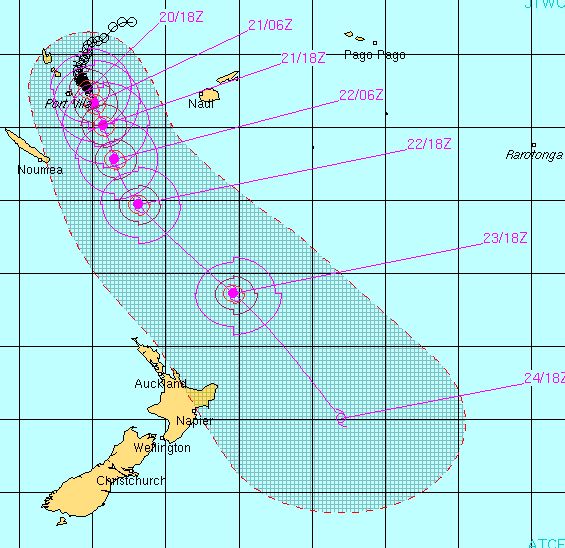 It seems that in any event, Atu is to be well off shore when it reaches NZ. I am in Port Vila, Vanuatu, right now, and Atu just passed the island today some 150km to the East (much closer than Atu is predicted to come to NZ), it is category 4 now, however apart from strong winds and heavy seas, we fared rather well. Good luck NZ, you will be fine!

Hi, am I right in my interpretation of those images, that Atu will be a category 2 storm by the time he reaches NZ waters?

That’s correct…although we suspect he may be stronger to start with, but then weaken rapidly.

Cheers for all the excellent tracking and predictions – have this ominous gut feeling that this one may clip us out here. Hoping Im wrong. Watching your postings with great interest.

When is Atu due to passing the east cost of the North Islands??

Better “up” the SE winds in the far north and SW for Auckland and the western NI areas.