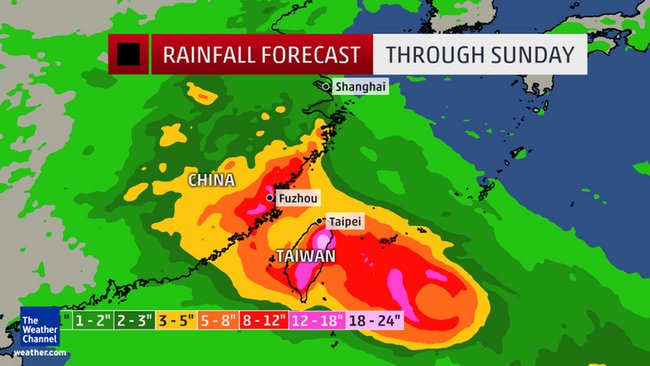 According to Thursday’s 5 p.m. EDT bulletin from the Joint Typhoon Warning Center (JTWC), Soudelor was still the equivalent of a strong Category 2 hurricane with maximum sustained winds of 110 mph (177km/h) (one-minute average) with higher gusts.

Lanyu, which is located just to the southeast of the main island of Taiwan, has seen tropical-storm force sustained winds to 45 mph and typhoon-force wind gusts to 75 mph (119km/h) as of early Friday morning, local time (Taiwan is 12 hours ahead of U.S. EDT).

(MORE: What is the Saffir-Simpson Hurricane Wind Scale?)

Soudelor continues to track to the west-northwest over the Western Pacific, steered by high-pressure aloft over Japan, which is also responsible for stifling, persistent heat over the Japanese mainland.

Thanks to this upper-level high pressure system, Soudelor will be guided toward Japan’s southwestern Ryukyu islands, Taiwan, then parts of southeast China Friday into Saturday.

The red swath depicts the possible path of the center of the circulation. Note that a tropical cyclone’s impacts such as heavy rain, high surf, and strong winds extend some distance away from the center of circulation.
Soudelor appears to be strengthening, based on infrared satellite imagery.

Both JTWC and JMA forecast additional strengthening as Soudelor approaches Taiwan and the southwesternmost islands of Japan.

This is partially due to the cyclone’s path over ocean water of increased heat content, as well as the impressive upper-level outflow channels to the north and south of Soudelor.

Here is the latest forecast timing of the closest approach of the center of Soudelor, according to the JTWC (all times local):

Flooding from wave setup and storm surge will build by late Friday into Saturday along the east coast of Taiwan. Damaging winds will bring down trees, trigger power outages, and lead to structural damage, particularly of any poorly-built structures.

As with many tropical cyclones that affect this mountainous island with a densely-populated west side, rainfall flooding and landslides will also be a danger.

Total rainfall of over 12 inches (300 millimeters) is likely over the central mountains of Taiwan, with locally higher amounts. Taipei may see over 6 inches (150 millimeters) of rain.

A direct hit of the eyewall on the Taiwanese capital, Taipei is possible. According to NOAA’s historical hurricane tracks database, only 10 Category 4 or stronger equivalent typhoons since 1958 have tracked within 65 nautical miles of Taipei.

The center of Soudelor will pass well south of the main island of Okinawa (including Kadena Air Base).

Kadena Air Base was put under tropical cyclone condition of readiness (TCCOR) “storm watch” early Wednesday, meaning winds of 40 mph or greater are possible, but destructive winds were not expected.

Impacts will be more severe south of Okinawa in the Miyako and Yaeyama island groups where strong, damaging winds are possible.

In southeast China, the provinces of Fujian, Zhejiang and Guangdong are most at risk of a typhoon landfall this weekend. These provinces have a combined population of 200 million. Soudelor’s circulation is then expected to curl northward, potentially spreading heavy rain to Jiangxi, Anhui and Hubei provinces.

Shanghai is at the northern edge of Soudelor’s center path. However, gusty winds and locally heavy rain are possible.

Soudelor’s center will most likely track well northeast of Hong Kong, so the primary impact there may be an outer band of heavy rainfall. Any track farther south over the next few days may bring the center ultimately a bit closer to Hong Kong.

Soudelor’s large wind field may also bring some impacts to the far northern Philippines. Tropical storm-force winds are possible over the small islands of Batanes province, which lies north of the main island of Luzon.

Also, rainbands on the southern edge of Soudelor’s circulation have triggered deadly flooding in parts of the Philippines, and this threat may persist into the weekend.