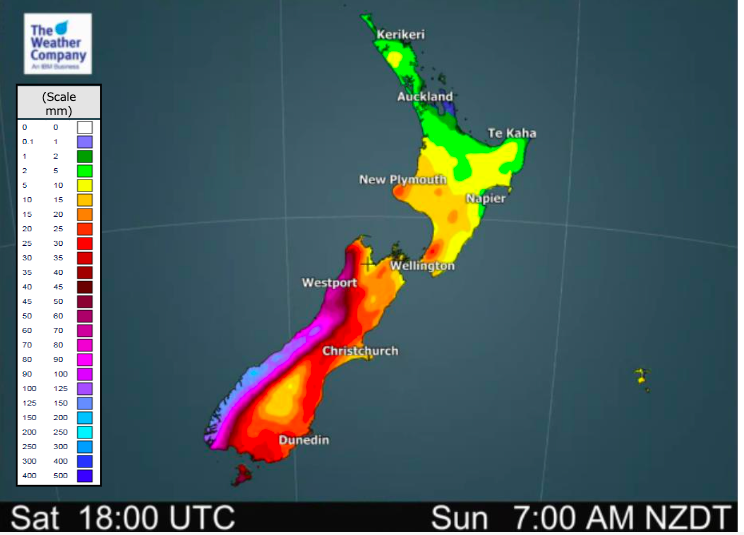 Here’s a general outlook covering the main weather features across the next 7 days. — Monday: This week kicks off with showers and cloud in the west of both islands and the lower half of the South Island. There may be a few isolated heavy showers later on Monday PM inland. Sunniest regions will be in the eastern North Island from Wairarapa to Gisborne. Warmer than average in all regions and average to above average overnight.

Tuesday: A west to north west flow picks up in the lower South Island with gales in exposed areas and a cooler change arrives later or overnight. Rain falls in Fiordland and south Westland with heavy falls moving northwards slowly across the day (reaching populated places on the West Coast later in the day or at night). Warm in the east of both islands. Again most of NZ will be warmer than average. Dry elsewhere in the South Island and across most of the North Island.

Thursday: Cooler southerlies continue across NZ with showers mostly in the eastern North Island and the eastern and upper South Island. However high pressure is again growing from the west and this will see a drier and warmer westerly wind return to Southland and other southern areas.

Friday: High pressure expands across NZ again with dry weather in most areas although a few showers are possible in the very upper eastern North Island in a slightly cooler SE wind flow.

Next Sunday: A small area of low pressure may move into central NZ with rain or showers but again high pressure expands from the south into southern NZ. Air pressure also remains high between NZ and the tropics – blocking sub-tropical rainmakers from forming.

CONCLUSION:
Overall a warmer than normal start to the week with a cooler change moving up the country later on Tuesday and into Wednesday before milder air returns late week in many places but with another small rain maker into the weekend.

While the rain last week in Auckland was great, WeatherWatch.co.nz is still forecasting a drier than average week ahead in the upper North Island but a little wetter than normal for some central NZ areas (upper SI/lower NI).

SOME MAPS OF INTEREST:

As always, for hyper local data refer to the HOURLY forecasts at www.WeatherWatch.co.nz, our free WeatherWatch App or from RuralWeather.co.nz

PHILIP DUNCAN WEATHER VIDEOS
These return again this coming week from Tuesday, up until the Christmas holidays.

Our next ClimateWatch video and news update (for December and Summer months) will be out on Monday November 30th.