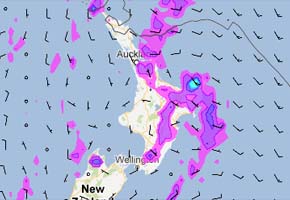 The anticyclone moving over the South Island currently will move east overnight and the centre will lie out to the east of New Zealand tomorrow extending a ridge back over both Islands. For the most part the weather will be settled tomorrow however there are a few exceptions.

Some cloud is likely to develop about Fiordland as the flow tends northerly there, there are bound to be areas of cloud about the upper half of the South Island however there will be sunny periods too with light winds. In the North Island the odd shower is likely to pepper the east coast in an easing southeasterly airflow.

There is another interesting feature tomorrow which I am particularly interested in, and is a sign of warmer weather developing.

In the afternoon about Auckland in a line through to the inland ranges of Hawkes Bay and areas northeast of there. A few isolated showers are likely in the afternoon due to heating from the sun and an upper cold pool of air, which is –27 degrees celsius about 5000 metres up in the atmosphere.

There is even the chance of a few thunderstorms with the most likely areas to receive thunder being the inland ranges of Hawkes Bay, eastern Central North Island and southern parts in the Bay of Plenty. It isn’t a high risk, only low to moderate but I’ll be keeping a keen eye out to see how the day progresses.