Home > News > Another weekend and another northern low...

Another weekend and another northern low 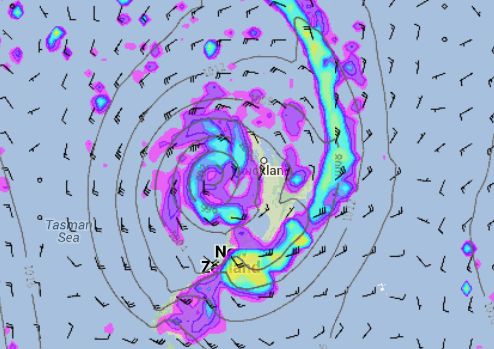 For the third consecutive weekend a low pressure system will be directly affecting much of the North Island and parts of the South Island this weekend.

The low – which is different from the previous two sub-tropical ones as this one is forming in the central Tasman Sea – will quickly deepen over the next 36 hours bringing a band of rain to much of the North Island at some point on Friday and rain or showers for the top half of the South Island.

By Saturday evening the low should be where the other two lows were at roughly the same point – smack bang over the top of Auckland.

This means rain on Saturday will likely remain near the centre only for most of the North Island, while Friday’s band of rain now pushes down the eastern side of the South Island in the form of a wet nor’easter on Saturday.

By Sunday the low, now much weaker, should lie near East Cape, bringing yet another south east wind flow to the upper North Island, which is generally dry and warm for Waikato and Auckland.  The flip side will be some patches of rain or showers for a few eastern areas of New Zealand on Sunday.