Another 30 degree Tuesday for parts of NZ (not all!) 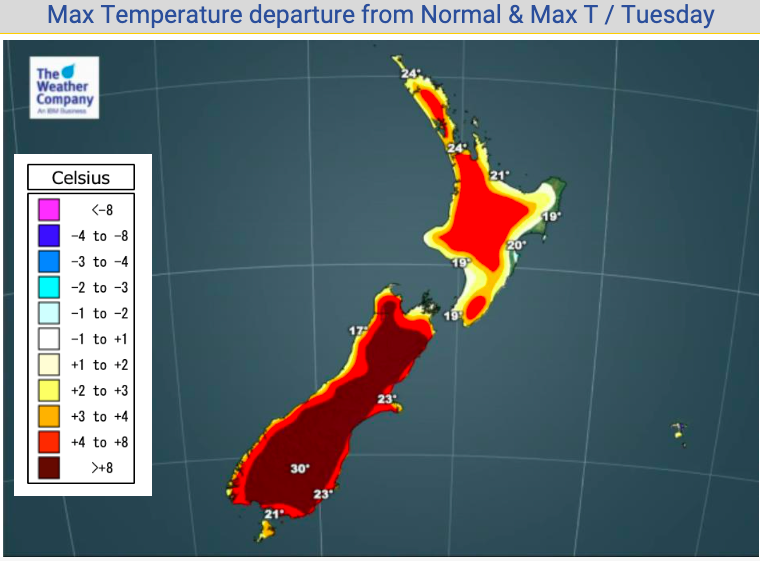 Inland regions in both main islands of New Zealand will be reaching around 30 degrees on Tuesday as a large high rolls in.

WeatherWatch.co.nz says that inland parts of every South Island region will have daytime highs over 8 degrees above average

Central Otago, inland Canterbury, and inland Waikato may all have some communities reach the 30 degree mark on Tuesday afternoon. Highs in the mid to late 20s are confidently forecast for most, although those in the coastal fringes of those regions won’t be as mild.

Surrounding regions inland like northern Southland, Marlborough, inland Nelson and parts of Wairarapa and Northland will be in the mid to late, 20s.

Sea breezes will have a cooling impact with easterlies on the beaches of Dunedin and Christchurch shaving 10 degrees off the daytime highs, putting them around the 20 degree mark for daytime highs.

The hottest main centre looks to possibly be Alexandra where a high of 32 is possible in the shade.

Coolest areas will be in coastal parts across New Zealand, including parts of Auckland exposed to the fading southerly flow off the Tasman Sea.

Also, many regions may be cooler to kick off the day with lows in the single digits for many overnight Monday/Tuesday morning.