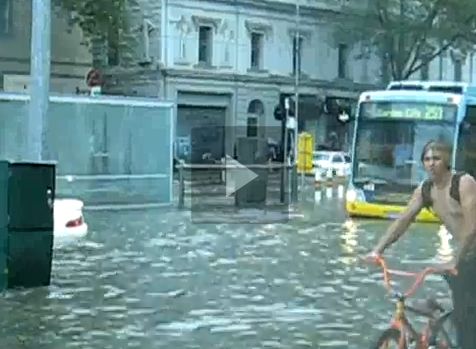 Victorians are still reeling from yesterday’s wild weather as they brace for possible flash flooding today.

Storm damage to Melbourne’s Docklands Stadium is reported to be in the millions after part of the roof collapsed and bars flooded.

“There are a lot of homes that have building damage. We’ve had some buildings that the actual walls have collapsed,” SES spokesman Scott Hilditch said.

He says after 3,000 jobs yesterday, there is a backlog of 2,000 today. Interstate volunteers have been brought in to help local SES crews deal with the damage.

But the sun is not shining just yet – the weather bureau says rainfall is now expected to reach 100 millimetres in some areas, with the middle and eastern parts of the state expected to be worst affected.

“Yesterday we had golf- to tennis ball-sized hail and certainly there’s a prospect of similar sized hail somewhere in the state today,” said Richard Carlyon, the Bureau of Meteorology’s senior forecaster.

“Whether it’s Melbourne I’m not so sure about … but if it’s not Melbourne, I think there’s a very good prospect of large hail being reported somewhere in the state.”

The SES is advising people to stay clear of creeks and storm drains.

“There’s been locally heavy rain around and [it] will continue in the Melbourne area,” he said.

“Fifty-eight [millimetres fell] at La Trobe Valley Airport, the same down at Drouin, so we’ve certainly had very heavy falls down in that area of the state overnight,” he said.

“Then in the second half of the night, the rain has eased quite a bit. There’s still rainfall around and the odd thunderstorm. It’s mainly coming down through the northern areas, Yarrawonga, Shepparton, down toward Seymour.”

But Docklands Stadium copped the brunt of the wild weather before the storm moved east out of Melbourne.

Last night’s preseason cup match was lucky to have an audience, after officials kept fans out until just before the clash between St Kilda and Fremantle got underway.

The match started 20 minutes late, as work was done to close off some areas to the public.

ABC Grandstand’s Dan Lonergan, who called the match, says he is amazed the crowd of 2,000 made it in.

“I remember rolling up, they only had one gate open to the public, but they had said there’d be no-one going in at this stage,” he said.

Mr Lonergan says one bar in particular was devastated.

“You looked down … and you thought ‘they’ll never get this fixed in the foreseeable future’,” he said.

“It was just completely awash with water – the roof had fallen through and there was glass everywhere and it looked terrible.”

The hail also damaged the roof of Southern Cross Railway Station and trains were not able to stop there for hours.

Meanwhile, the National Gallery of Victoria (NGV) was evacuated yesterday when it started to flood, and will remain closed today.

NGV spokeswoman Sue Coffey says it is not believed any artwork has been damaged, but water flooded both the St Kilda road and Federation Square venues.

“We evacuated people when the rain came through, so we now have two clean-up teams working through the day just to ensure that everything is OK,” she said.

“We have closed to the public. We hope to be open tomorrow, but I’d just encourage people to look at our website, to see how the situation is progressing.

Reports are that it was caused by a supercell. Interested to know whether any photos or film of the cloud formation were taken, can’t find any on the net so far. I have a friend who got caught in it camping but survived! I note that the depression is well to the south but the front is heading this way, what if any are the risks to New Zealand?