#AgWeather: May set to kick off warm as sub-tropics refuse to leave NZ 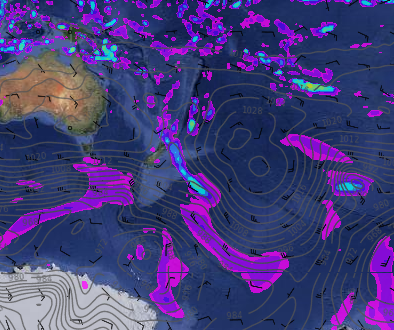 It’s the first day of May this Sunday but the weather forecast feels more like late March as we talk yet again of sub-tropical air flows.

May 1st is expected to start with high pressure across most of the North Island and upper South Island – but a warmer than average nor’west flow is likely to develop this Sunday helping lift temperatures in the South Island’s east.

The entire first week of May sees high pressure gradually moving off the North Island and out east over the Pacific Ocean, but it really does take an entire week to do this, taking us into the second week of May.

For NZers living along the east coast, this will continue the very dry pattern you’ve had through April.

As this high next week does start to move it will allow windier weather over the South Island (plenty of warm nor’westers) and the central NZ area (Cook Strait). Rain and showers will also affect the West Coast for a few days next week.

As we move into week 2 of May this big high should lie east of NZ – perhaps allowing sub-tropical air to sink over northern New Zealand in the form of low pressure.

Long range models indicate no shortage of large highs pushing out from eastern Australia and over the Tasman in May (much like all of 2016 actually) – that will keep this dry pattern in the east going (which isn’t good news for those who need rain).

It’s unclear if the sub-tropical air in the second week of May will bring much rain to the North Island – we’ll have a better idea later next week. As with anything sub-tropical, there is the chance for localised flooding, as we’ve seen three times already this year in New Zealand.

Despite being halfway through Autumn there is still little, if any, data that supports a major nationwide cold snap anytime soon. We’ll keep you posted if/when that changes.

*Remember, as with all our forecasts, this is entirely independent of MetService or NIWA

Early 2nd week i see the GFS indicates snow to roughly 300 or 400 meters so this would be a cold snap, wouldnt it? And im seeing that cold SW flow persist well into that work for much of the South Island too, but very little making it into the N.I… Ive attached an image showing how close the sea level snow is to the country