Home > News > A week of fronts and cold weather on the...

A week of fronts and cold weather on the way 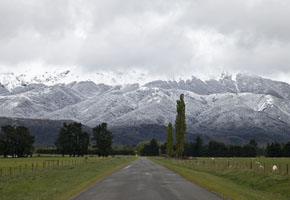 The week ahead certainly isnâ€™t straight forward, mucky in a simplistic sense would be a term that comes to mind. The week starts off with mild temperatures then progressively highs will dip lower from Wednesday / Thursday across the country. It should be a good week for ski fields though which are on the lookout for snow.

For todayâ€™s weather check out this mornings
forecast here.

On Tuesday the airflow is southwesterly and two fronts lie within this flow. The first one moves up the western side of New Zealand during the day bringing showers (some heavy) as it moves north. The second front moves through Southland
and Otago from late afternoon bringing showers, heavy at times with hail and
snow lowering to 500m overnight for most, coastal Otago sees snow to 700m
overnight. Eastern regions from Canterbury northwards see the best weather,
temperatures will be mild to warm.

The flow changes on Wednesday across most of the country as the front which we see a hint of late on Tuesday about the lower South Island moves north, it tilts more to the south so that means cold air spreading north. This is the ski fields day of rejoicement which includes North Island ski fields, it wonâ€™t be a massive fall of snow but it will definitely be welcome.

So for the North Island expect showers for all western regions during the day, showers may be heavy at times with hail afternoon onwards and expect snow to 700m. Eastern regions may see a brief morning shower then clearing to mostly sunny weather, overnight southwesterlies bring showers. For a detailed look at Wellington head to our Wellington forecast page at WeatherWatch.co.nz.

For the South Island morning rain clears in the west then becoming mostly sunny with south to southwesterly winds freshening. Wintry showers and cold south to southwesterly winds about Southland and Otago spread up
through to Marlborough by evening, snow to 500m (perhaps 400m at times) about
Southland and Otago then 600m about Canterbury and Marlborough. Areas of
precipitation about Marlborough later in the evening and overnight mainly south
of the Wairau Valley.

By the time Thursday comes around the air becomes even colder however due to the airflow which will be more southwesterly only coastal fringes right up the east coast of both islands will see any precipitation. It may be so coastal on the east coast that Christchurch city may be mainly sunny then towards the Port Hills and Banks
Peninsula there could be wintry showers with small hail at times and a few snow
flurries to 600m at first then lowering to 400m later in the day.

Southland is still one to watch on Thursday with snow to 400m lowering to 200m in the evening then clearing around midnight. Southland in general will be the hardest hit region in terms of low level snow during this bout of cold weather.

The West Coast of the South Island is sunny, expect showers at times for the west of
the North Island during the day with some snow to 700m once again, showers heavy at times later in the day Auckland northwards.

Finally on Friday a ridge brings a reprieve with conditions easing for most, but this does mean frosty temperatures at night, mainly about the upper South Island northwards. About the lower South Island a northwesterly
airflow quickly moves in stirring things up meaning the temperatures wonâ€™t be able to drop too far.