Home > News > A summer storm that looks more like a wi... 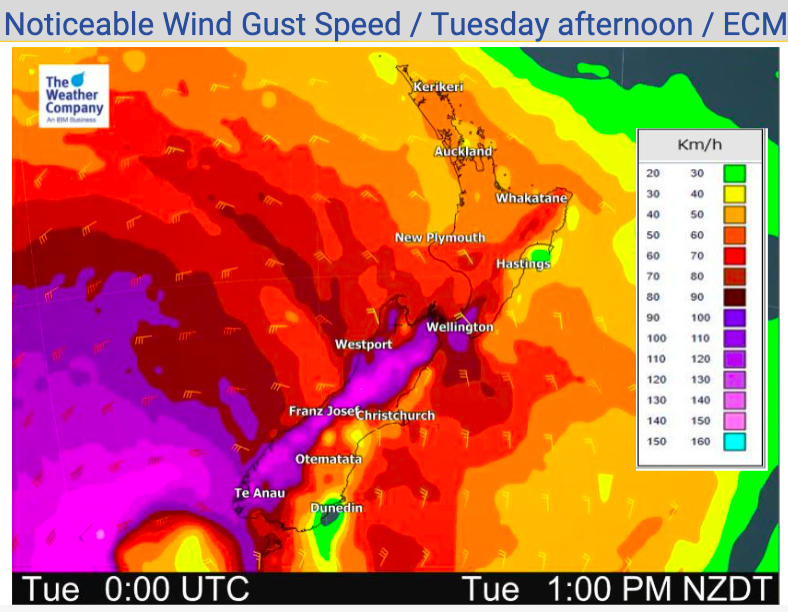 Damaging gales over 150km/h, waves up to 13 metres, a metre of snow on the tops of the Southern Alps and over 200mm of rain possible for parts of the West Coast.

This would be a significant and serious weather event for New Zealand in mid-winter let alone smack bang in the middle of summer.

A stormier Southern Ocean weather pattern is temporarily putting the La Nina pattern to one side with two significant lows – one today Sunday and the other around Tuesday/Wednesday.

The Sunday low, which is still yet to push in some thunderstorms, rain and wind for parts of NZ, will actually be tracking away from the country today. So we don’t expect anything too serious today, although keep up to date with any possible MetService severe warnings where you are.

The storm early to mid this week has potential to be much more serious, especially for those outdoors, tramping or camping or on boats.

The Tuesday/Wednesday event looks to be most intense with the centre of this storm potentially crossing Southland and Otago (not locked in, it may still go a little further south but very much in the risk zone at the moment).

As we see this storm moving through it will first push damaging nor’west gales up the nation then be followed by a wintry southerly change, mostly impacting the southern half of the South Island whilst bringing heavy rain to the West Coast.

The North Island is mainly impacted by gales on Tuesday/Wednesday in southern and eastern areas in particular. Wellington and Wairarapa will be especially windy.

Auckland will be just getting to gale at times in gusts but generally won’t be as bad as those further south. The colder air also won’t really be impacting northern NZ although people will feel the cooler change.

In the South Island the days ahead will be much colder than usual with some places dropping over 10+ degrees below normal on Wednesday.

There are a lot of moving parts to the incoming weather so use www.RuralWeather.co.nz and the HOURLY LOCAL data at WeatherWatch to help work out finer details. Here are the general risks:

WIND:
Blustery winds in the days ahead with gales off on and from Sunday to Thursday. The main low today is already starting to track south of NZ so even though winds may increase across today, the low isn’t getting closer to NZ so we aren’t expecting too many serious issues. Campers will perhaps find it most annoying. Keep up to date with MetService warnings.

Peak winds will be on Tuesday with Severe Gales in both islands likely as the West to North West winds blow through. Wellington has winds on Tuesday averaging gale force and gusting over 120km/h in the city centre, this is damaging. Gusts on the Wellington hilltops may be over 150km/h – along with some extreme exposed parts of the South Island, in the mountains and some wind tunnels. Most main centres are not as exposed – see the wind graphs for your local area at www.RuralWeather.co.nz for more.

Tuesday and early Wednesday look to be specifically the highest risk time for damaging gales.

Campers and trampers are advised to be aware of ALL MetService mountain and marine forecasts which you can find on their website.

Centre of Storm Number 2:
The second storm on Tuesday and very early Wednesday may just make landfall in Southland and Otago. Some models indicate the centre of the low may move over land. If this occurs it will mean the lower half of the South Island (in exposed areas) will be extra exposed to damaging winds. This area of wind may also move further away from NZ than currently forecast – so we’ll have much more of a focus on this in our Monday update. As we saw with a storm last year that brushed Otago Peninsula, these offshore lows can generate a very localised area of intense gales – one to monitor and we’ll have more details tomorrow. Again, your hourly local forecast will help you gauge some of your risks (on top of the warnings etc).

RAIN:
Heavy rain on the West Coast with accumulations in the mountains of potentially 200 to 250mm over the next 5 days. This is very heavy and could lead to slips, flooding and even road closures. Swimmers should avoid streams and rivers while in flood and until waters clear in the days following.

SNOW:
Unbelievably but we have snow maps for mid January. WeatherWatch.co.nz stopped producing these back in December because, ya know, it was summer. Snow in summer does happen from time to time – but these totals in the mountain ranges are quite extreme with some estimates a few of the taller peaks could accumulate over one metre of snow this week.

How low down will it go? Keep up to date with the tax funded mountain and national park forecasts over at MetService for more details but if you take a look at RuralWeather.co.nz we will use the snow icon when the right air temperature + rain has been met (to make snow). You may find in some remote parts of the South Island our forecasts show a snow symbol if you’re above a few hundred metres. It’s worth noting that sea level Milford Sound has a high of just +4C on Wednesday, indicating that very cold southerly will be putting snow low down in to Fiordland National Park (trampers please take note).

We have snow flurries or sleet possible in Arthur’s Pass this week too, likely mixed in with some rain.

TEMPERATURES:
A huge drop for many places in the south this week, although Canterbury isn’t quite so badly impacted. Some places have single digit highs on Wednesday in Otago and Southland and Fiordland. The days either side aren’t too flash either. Wind chill each hour can be found at www.RuralWeather.co.nz for the next 10 days out in any location across NZ.

SEA:
Major waves are coming for the south western corner of NZ – in fact they are the same size as the ones forecast for Fiji with Severe Cyclone Yasa, around 12 to 13 metres. This risk zone is in the south western corner of the South Island. Dangerous rips and waves will affect much of western NZ this coming week and southern regions too. Elsewhere strong or gale force winds pose a risk in eastern NZ as this could blow people on floatable devices out to sea even if sea and sky conditions aren’t too bad.

TRAVEL:
Travel plans are likely to be impacted this week here and there…

MARINE:
Boats and chartered services around the South Island, Cook Strait and western North Island may be cancelled or delayed due to hurricane force winds at sea and dangerous swells.

ROAD:
Slips and flooding may impact some West Coast highways. Gales may also impact caravans and large vehicles through parts of the South Island and lower North Island.

Some snow may fall on highways through the Alpine Passes.

FLIGHTS:
Will likely impact some regional flights around Wellington on Wednesday and some flights over Tuesday and Wednesday in both islands may be impacted by gales.

Snow may also impact ALL Alpine Highways over the South Island. We have a chance of rain/snow mix in Arthur’s Pass, for example. Check www.RuralWeather.co.nz for more.

Sad no rain in Auckland, but happy about the drop in tempreture. Will make sleeping at night a bit easier.