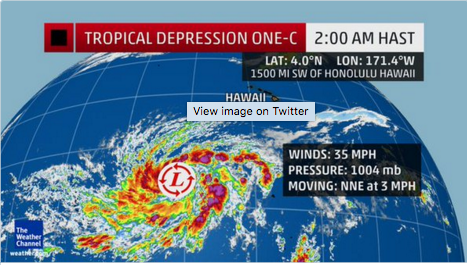 January is not typically a month in which tropical systems develop in the central Pacific, but Tropical Depression One-C formed Thursday morning becoming earliest central Pacific tropical cyclone on record.

This is on the heels of a historically active 2015 tropical season in the Pacific Ocean, including a Tropical Depression Nine-C, which formed near the end of the year and dissipated on Jan. 1, 2016.

Sufficiently warm sea-surface temperatures and relatively low wind shear in the vicinity of the system suggest that this system may be able to organize into a tropical storm later Thursday.

The system would get the central Pacific name “Pali” if it reaches tropical storm status east of the International Date Line.

Tropical Depression One-C is expected to move slowly toward the north and northwest over the next few days. This system is currently no threat to land. The latest map of the projected path can be found here.

Area of thunderstorms in the Central Pacific has been upgraded to Tropical Depression One-C by RSMC Honolulu. pic.twitter.com/T3PUZeQfzq

Dating back to 1949, only two tropical storms have formed in the central Pacific in the month of January. Tropical Storm Winona was the first on Jan. 13, 1989 and the second was Ekeka on Jan. 28, 1992, which reached Category 3 hurricane intensity amidst the moderate El NiÃ±o of 1991-92.

El NiÃ±o has played a role in the formation of this unusual tropical cyclone. According to the Central Pacific Hurricane Center, “This low-latitude out-of-season system has tapped into significant directional shear of the low-level winds, with an El NiÃ±o related westerly wind burst south of the system, and prevailing easterly trade winds to the north providing the large scale conditions conducive for development.”

If this potential Pacific tropical system weren’t strange enough, the Brazilian Navy Hydrographic Center’s ServiÃ§o MeteorolÃ³gico Marinho analyzed a tropical depression off the east coast of Brazil in the South Atlantic this week. It’s just another rarity in what has been an odd last couple of weeks in the tropics.

The official hurricane season ends on November 30 in the central Pacific and does not begin in 2016 until June 1.

Who knows how many historical storms there have been,  NOAA Central Pacific Hurricane Centre has this to say about cyclone detection.

The launching of the first meteorological satellite, TIROS I, in April 1960 announced a new era of tropical cyclone awareness and forecasting.

The pre-satellite detection of tropical cyclones in the Central and Eastern North Pacific was dependent on ship reports.  Therefore, the positions of first detection and the deduced storm tracks were mainly confined to areas along and between principal shipping routes.

Sadler (1963) examined TIROS V and VI data from nephanalyses published by the National Weather Satellite Center for the period August-October 1962 in order to detect cyclonic disturbances in the Central and Eastern North Pacific. He found 62 vortexes, 39 of which appeared to be of at least tropical storm strength.  Those vortexes were determined to represent 22 different storms.

A comparison of these data and the conventional U.S. Weather Bureau (1962, 1963) monthly tropical storm summaries showed that only 5 of the 22 storms were detected by ships or other conventional means.  One of the 5 was verified as an unnamed tropical storm by the ship GOLDEN STATE only in response to a TIROS alert message at the bottom of the last NWS advisory issued on another tropical storm (AVA) about 900 miles farther east.