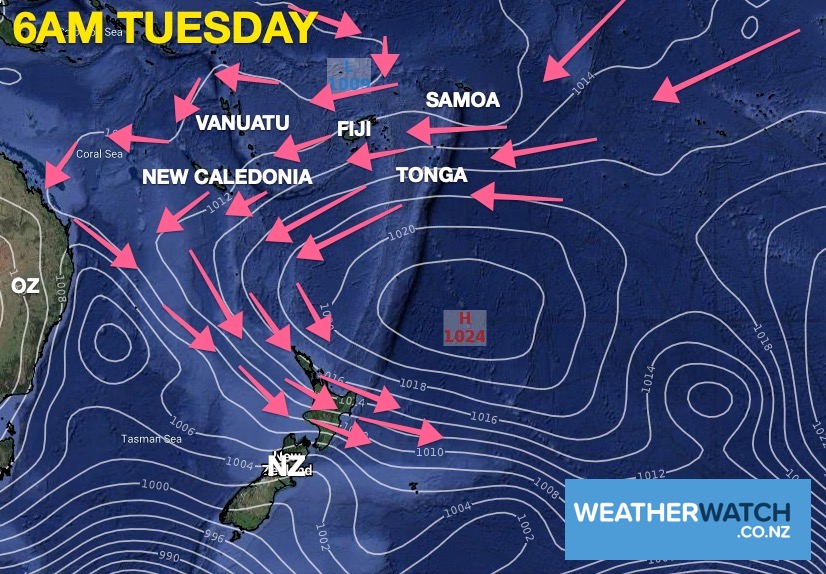 A hot nor’wester, sub-tropical for North Islanders, will boost temperatures on Tuesday (and some for Monday too).

Daytime highs in the east of both islands are forecast to be solidly in the mid to late 20s.

Varying amounts of high cloud may limit how hot some places get, but if the sun is out coupled with the nor’west wind then the 30 degree mark is possible to be met in some places.

WeatherWatch.co.nz says the incoming warm sub-tropical winds will be caused by a high departing northern NZ (this high is currently over northern NZ for Sunday bringing sunny weather and high cloud).

This high pressure system will lie north east of NZ on Tuesday and the anticyclonic flow around it will reach up to Samoa and Fiji and pull that airflow down and over New Zealand. A cooler sou’west flow will push it all away by late Wednesday and Thursday.

Highest contenders for hitting 30 degrees on Tuesday (and some may make it on Monday too) will be: Hawke’s Bay, Canterbury, and Northland.

Hawke’s Bay perhaps looks to be the hottest with overnight lows on Monday night/Tuesday morning around 18 to 20 degrees at the coolest part of the morning (5am – 6am!). Highs in the shade on Tuesday will likely be in the late 20s with Hastings tipped to reach 29 degrees. It’s possible places inland could go a few degrees higher than that.

Northland will have the added aspect of humidity with the sub-tropical winds. Whangarei has a high of 28 on Tuesday but the Humidex temperature (or ‘feels like’) is likely to be 32 degrees.

Canterbury is more borderline with thicker cloud cover spreading over the Southern Alps at times and most places not quite in that sub-tropical flow. Still, highs in the mid to late 20s are possible so 30 isn’t out of the question when a north to nor’west wind is at play in December.

For more details – and 10 days of Humidex temperatures too – check out all the extra graphs and data at www.RuralWeather.co.nz.

Don’t forget, see our interactive Max (and Min) temperature maps here + Air Temperature maps for all of NZ (and the world) for every +3 hours across the next 10 days ahead. www.weatherwatch.co.nz/maps-radars/temperature/maximum-temperature