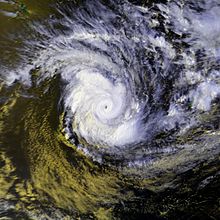 This month is the 25th anniversary since Cyclone Bola hammered eastern areas of the North Island.

Cyclone Bola, one of the most damaging cyclones to hit New Zealand, struck the Hawke’s Bay and Gisborne–East Cape region in March 1988.

The cyclone slowed as it moved over the area, resulting in over three days of torrential rain. Worst affected was the hill country inland from Gisborne, where winds forced warm moist air up and over the hills, augmenting the storm rainfall.
In places, over 900 millimetres of rain fell in 72 hours, and one area had 514 millimetres in just a single day.

The ensuing floods overwhelmed river stopbanks, damaged houses, swept away bridges and sections of roads and railway lines, and destroyed parts of Gisborne’s main water-supply pipeline. Three people died in a car that was swept away by flood waters, and thousands were evacuated from their homes – 3,000 in Gisborne, 300 in Wairoa, and 400 at Te Karaka.

The downpours triggered innumerable landslides on the region’s hillside pastures. Some farmers lost 30% of their grazing area, with landslide scars taking decades to heal. Huge quantities of sediment were dumped into the flood waters. One 11,000-hectare catchment deposited a million tonnes of sediment into the WaipÄoa River.
Thick sediment from the ebbing floods smothered pastures, orchards, and crops ready for harvest.

Cyclone Bola was estimated to have cost $90 million in losses to horticulture and farming, and the cost to the government was over $111 million.