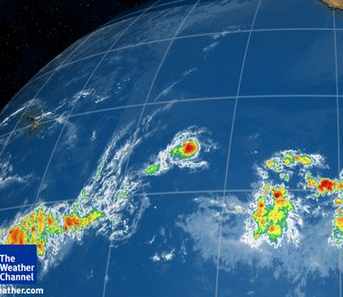 The dearth of named tropical cyclones in the tropical northern Pacific Ocean in 2016 is nearing record territory after one of the most hyperactive years in 2015.

There hasn’t been a single named storm of at least tropical storm intensity in the North Pacific Basin since Hurricane Pali became a January oddball just north of the equator and well southwest of Hawaii.

Most impressive is the lack of a single tropical storm, much less a typhoon (the term for a hurricane in the western North Pacific Basin), west of the international date line since mid-December 2015, in the world’s typically busiest tropical cyclone corridor.

The highest cloud tops, corresponding to the most vigorous convection, are shown in the orange and red colors.
This is rapidly approaching the record longest stretch without at least a single tropical storm in the western North Pacific basin in 66 years of records, according to Colorado State University tropical scientist Dr. Phil Klotzbach.

Why has the NW Pacific been so quiet? One reason… anomalous sinking motion has dominated over past two months. pic.twitter.com/BFJSJms4cU

By late June 2015, there had already been eight tropical cyclones in the northwest Pacific basin, including three super typhoons of Category 5 equivalent intensity.

The eastern North Pacific basin has already set a record long wait for the first tropical storm in 2016.

Tropical Depression One-E made a failed attempt to become the first of the season in early June. On average, the basin would’ve seen two named storms, one of which would reach hurricane strength, by late June.

The highest cloud tops, corresponding to the most vigorous convection, are shown in the orange and red colors.
One year prior, there already had been a pair of Category 4 hurricanes â€“ Andres and Blanca â€“ in the eastern Pacific Basin, and a third named storm, Carlos, also became a hurricane by mid-June 2015.

Fueled in part by a record-tying El NiÃ±o, the eastern Pacific Basin saw a record nine hurricanes reach at least Category 3 intensity in 2015, as well as the strongest tropical cyclone on record in the Western Hemisphere, Hurricane Patricia.

The Central Pacific Basin (from 140 degrees west longitude until the international date line, including Hawaii) also set a record for activity in 2015, with 14 named storms and eight hurricanes, five of which reached at least Category 3 intensity. At one time, three Category 4 hurricanes were active at once in the central and eastern Pacific basins for the first time on record.

Thanks in large part to the snoozing north Pacific basin, Klotzbach noted that tropical cyclone activity (measured by the accumulated cyclone energy or ACE index) in the northern hemisphere, despite the four named storms so far in the Atlantic basin, set a 45-year record low for the period from Jan. 16 to June 23, 2016.

How unusual is this “drought”?

This is the first time in records dating to 1950 that the entire North Pacific Basin has failed to generate a single tropical storm from Jan. 15 through June 21, according to Klotzbach (Note: “Agatha” formed on June 13, 1998, putting an end to the previous record streak).

Despite that, these long dry spells have happened before.

“These types of tropical cyclone droughts are fairly common when moving away from strong El NiÃ±o seasons,” said Klotzbach via Twitter.

As shown in the previous table, Klotzbach noted the four longest such droughts in the western Pacific Basin, including the current event, all immediately followed strong El NiÃ±os.

“Both the El NiÃ±o and the Madden Julian Oscillation (MJO) have tended to force sinking motion over the Northwest Pacific,” said Klotzbach. The MJO is a large-scale, long-period wave of upward and downward motion that propagates around the tropical latitudes.

This sinking motion leads to drier, more stable air, fewer clouds, showers and anomalously high pressure at the surface over the western Pacific Ocean. All these factors work against the formation of tropical cyclones.

The western Pacific Basin is typically the most active area for tropical cyclones on Earth, where named storms, even typhoons, can form any month of the year.

As is the case in the eastern Pacific and Atlantic basins, western Pacific activity typically reaches a peak in August and September, so this drought won’t last long.

However, with a potential developing La NiÃ±a (cooler-than-average equatorial Pacific water; opposite of El NiÃ±o) later this summer and fall, Klotzbach also pointed out tropical cyclone activity tends to be less in the Pacific during La NiÃ±a years. So perhaps the hard-hit Pacific basin may get a bit of a breather after a frenetic, record-smashing 2015.

Then again, it’s important to keep in mind that it only takes one landfall to make any season “active” or “destructive.”