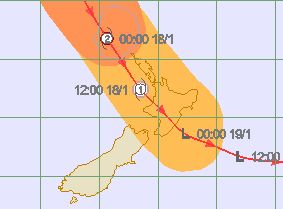 Tropical Cyclone Zelia is being predicted to come closer to the North Island than originally thought, according to computer tracking by the Joint Typhoon Warning Centre.

Zelia, tonight still a weakened Category 3 cyclone, was initially predicted to pass to the south west of Norfolk Island (700kms north west of NZ) however the latest projections show she may make a direct hit or even move slightly to the north east above the island.

Full details and maps below…

This slight shift could have a significant impact further south east when Zelia reaches New Zealand later on Tuesday with more updates indicating the low will cross the North Island on Tuesday evening/early Wednesday morning. 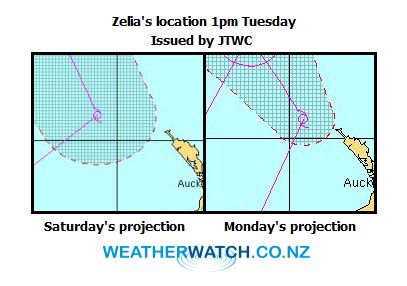 Compared to Saturday’s JTWC map the storm’s centre is likely to be roughly 200kms further east towards New Zealand.

WeatherWatch.co.nz says this will place the Far North and western Northland at a greater risk of receiving severe gales and heavy rain and slightly raises Auckland’s risk.

Auckland is over 150kms further east than the Far North, placing it that much further east of Zelia as she tracks by.

Zelia is likely to approach New Zealand with winds equivalent to a Category 2 cyclone with winds at the centre of the system with winds gusting up to 160km/h.

WeatherWatch.co.nz and MetService both predict Zelia will pass to the west of Northland and Auckland later on Tuesday afternoon.

Earlier WeatherWatch.co.nz forecasters believed the centre of the low would cross around Cook Strait however latest offshore models and MetService weather charts indicate the low may make landfall between Waikato and Taranaki – but as a much weaker low pressure system.

WeatherWatch.co.nz says that Zelia will be weakening “significantly and quickly” tomorrow as she encounters less favourable conditions but the fast movement of the storm towards New Zealand, over 60km/h, could help push up winds even more on the south east side of the depression.

The current Auckland forecast by WeatherWatch.co.nz predicts winds becoming gale force in exposed places tomorrow afternoon with the possibility of winds gusting to 160km/h on the exposed Manukau Heads, to the far west of the city on the Tasman Sea coastline.

Above: Current Set Up

Is Te Aroha likely to be battered a bit by this one?

Possibly – too early to say as the storm is shifting further east than expected.

Will know tomorrow morning. Special updates from early in the morning.

Any news on Norfolk Island, I’d imagine they would get hit pretty bad ?

Australia’s government forecaster – the Bureau of Meteorology – has fantastic weather observations on their website:  http://reg.bom.gov.au/products/IDN60801/IDN60801.94996.shtml

will kerikeri get bad

Northland is expected to have wind and rain – but no warnings are currently in force.  However a severe weather watch is in place.