Home > News > Your weekend forecast: A lot of high pre...

Your weekend forecast: A lot of high pressure but also a cold front 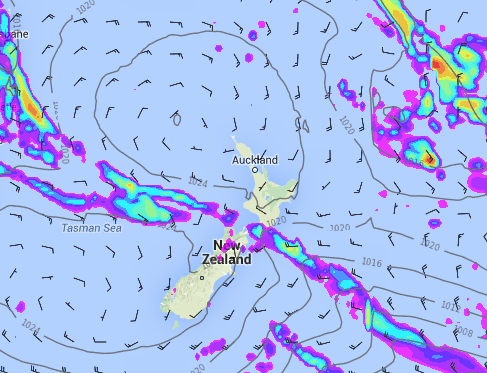 This weekend high pressure to the north and south will affect New Zealand – with a cold front trapped in between.

SATURDAY
North Island
On Saturday the North Island will be mostly under the northern high pressure system.  Latest satellite maps suggest anticyclonic gloom (low cloud that doesn’t blow away due to little to no wind) could affect some coastal areas of the upper North Island in particular.  Sometimes this can produce an isolated light shower hugging the western coastline (and Auckland). But generally the forecast is dry for Saturday with light winds, cloudy areas and fog patches in the usual places (like Waikato).

South Island
The South Island has a different weather setup, being south of this North Island high, it means a windier nor’west flow. This means a mild Saturday is on the way for many eastern areas – but a dry day also.  Rain will fall on the West Coast, heavy at times, as it moves slowly northwards.  Southland and Otago may see some late rain – but perhaps only overnight showers for dry Canterbury.

SUNDAY
North Island
On Sunday morning the cold front will move into the lower North Island – with high pressure to the north and south of it, the front’s days are numbered.  It will fall apart as it slowly moves towards the central North Island later in the day. Wettest weather will be in western areas – eastern areas may only get a few showers/spits.

Temperatures:  Average to above average on Saturday.  Average on Sunday.

Image / Sunday morning shows the weakening cold front over the Cook Strait area while high pressure balloons out over both the northern and southern ends of the country. Weathermap (see our MAPS tab for maps!)