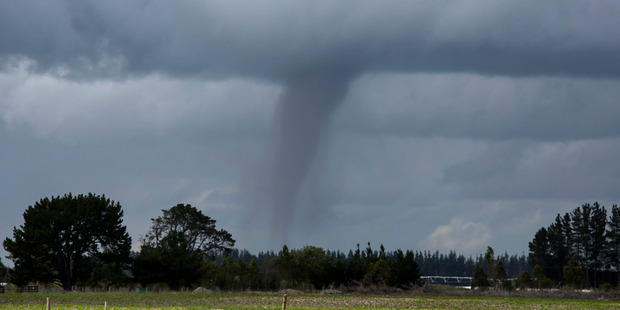 Floods, fires, thunderstorms and tornadoes all wreaked havoc this year as New Zealand shivered and sweltered through another 12 months of climatic extremes.

The nation’s typically mercurial weather caused millions of dollars in damage and incalculable heartache, from the evacuation of hundreds of homes to the death of an elderly man whose car was overwhelmed by floodwaters. But it also brought smiles and laughter as Kiwis basked in the scorching hot weather of summer – and flocked to the slopes for a bumper ski season.

Here are some of 2015’s most notable weather events.

A hot and dry start to the year was good news for holidaymakers, but it kept rural firefighters busy as patches of scrub burned in the upper South Island, including a 500ha fire at Arthur’s Pass.

The dry weather was punctuated by thunderstorms that brought hail, lightning and surface flooding to North Otago, Hawkes Bay and Wairarapa. Queenstown smashed its daily rainfall average with 55.4mm in 24 hours, while Wellington basked in a four-day warm spell of highs greater than 25C.

A dash cam caught the meteor racing across the skies. Photo / Supplied

The second month of the year got off to a dramatic start with more thunderstorms, destructive winds and a meteor strike.

An Air New Zealand flight was struck by lightning near Dunedin, while hail hit Central Otago on February 1. Three days later, Canterbury was lashed with strong winds that brought down trees and power lines, whipped up dust storms and fanned scrub fires, forcing the evacuation of residents and schools.

A sonic boom was heard and a blinding flash lit up the sky over much of New Zealand as a meteor entered the atmosphere about 10pm on February 11.

Heavy rain on the South Island’s West Coast caused slips, blocked roads and forced the evacuation of 17 homes on March 5. The next day, strong winds lashed the country, tossing shipping containers into Wellington Harbour and forcing a plane landing in Christchurch to slide off the runway.

There was more to come as ex-Cyclone Pam passed the country, cutting power in Auckland on March 16. The next day, all schools in the Gisborne region were closed and more than 100 people were evacuated on the East Cape. The ex-cyclone brought slips, road closures, fallen trees, power cuts and waves of more than 9m to some eastern parts of the North Island.

Diane Blomfield’s 24ft yacht was one of several yachts that were destroyed around Auckland’s Okahu Bay. Photo / Nick Reed

Later in the month, the North Island was battered with strong winds. Auckland was among the hardest hit, with boats torn from their moorings and pushed up against rocks along Tamaki Drive.

The last month of autumn brought torrential rain and tornadoes, starting with flooding and slips on the West Coast.

A four-day onslaught of downpours in Wellington from May 12 caused widespread flooding in Kapiti, Porirua and Lower Hutt, as the Hutt and Waikanae rivers burst their banks.

A man swept under a bridge at Paraparaumu was rescued by bystanders, but tragedy struck when the body of Dr Paul Hill, 80, was found near his submerged car in Petone.

Thousands of commuters were trapped in the capital as the road and rail links between the Kapiti Coast and Wellington were cut off. At least 20 homes were evacuated at Raumati Beach and schools were closed.

The same day, a tornado ripped through Mt Maunganui, lifting the roofs of about 20 homes and severely damaging part of the grandstand at Baypark Stadium.

Pauline Tahau standing in the lounge of her flood-damaged home at Wangaehu near Whanganui. Photo / Mark Mitchell

The start of winter brought major floods that caused more than $50 million in weather damage, according to the Insurance Council.

Dunedin was hit first, with a near record-breaking bout of prolonged rain causing significant flooding and numerous slips from June 3. The bad weather returned by mid-month. Wellington was battered with massive waves and high winds, while flooding in Hokitika forced the evacuation of 20 retirement home residents.

The heavy rain then moved up the lower North Island to Whanganui, where it caused the worst flooding on record. A state of emergency was declared and more than 100 households were evacuated on June 20.

The Whanganui River breached its banks around midnight, spilling floodwaters into the CBD. The next day, Whanganui was cut off by road and states of emergency were also declared in Rangitikei and Taranaki.

Auckland fared worst in July, with thunderstorms on July 7 and torrential rain a week later. Auckland Airport was pounded with 51mm of rain in just two hours, causing leaks in both terminals and flooding the road to the domestic terminal. Firefighters were called to dozens of incidents and had to pump water from more than 50 flooded homes in West Auckland.

On July 18, Auckland was hammered by strong winds that tore off roofs, brought down trees, flipped two light planes at Ardmore Airport, smashed boats into sea walls and cut power to 9000 customers. In Mt Maunganui there were water spouts and mini-tornadoes.

The Chateau Tongariro covered in snow as heavy snow fell across the Central Plateau. Photo / mtruapehu.com

Winter’s last month began with record-high minimum temperatures from August 3. But there was still plenty of winter’s icy grip left as heavy rain, strong winds and a small tornado struck the Bay of Plenty and Waikato.

Further south, snowfall closed roads in Fiordland and the Southern Alps, while in the central North Island, snow closed the Desert Road and brought the largest dusting of snow to Tongariro in eight years.

The big chill brought the first snow in living memory to Wairoa, while Auckland residents saw soft hail known as graupel – which resembles snow – and an impressive lightning display, accompanied by booming thunder.

Spring started with heavy downpours throughout the North Island and upper South Island, causing Auckland traffic to back up for 5km as Tamaki Drive was closed due to high rainfall and a king tide.

There were big snow dumps around Queenstown, with an unexpected 15cm knocking out power and felling trees in Makarora. It was good news for skiers, however, as Coronet Peak got record snow levels.

Heavy rain in Gisborne and the East Cape caused surface flooding, cutting off the town of Te Karaka on both sides. Schools were closed, while two adults and two children were stranded in their car at Wairoa for 18 hours. Strong winds lashed northern Taranaki.

A surfer takes advantage of waves whipped up by wind at St Clair Beach in Dunedin. Photo / Otago Daily Times

The month began much warmer than usual, but very strong winds hit throughout the South Island, knocking out power to 2200 homes in Canterbury and Otago, and smothering Twizel in a dust storm.

Rain and thunder followed as a caravan was blown off the road near Tekapo and flights at Invercargill were cancelled due to winds up to 130km/h. Strong winds and fires followed in the South Island.

A helicopter is called in to help fight a large bush fire in the Richmond Ranges Marlborough. Photo / Peter Burg

The last month of spring was plagued by frosty conditions in Marlborough, which was bad news for winemakers.

Strong gales tore the grandstand off the racecourse in Riverton and fanned large forest fires in Marlborough and Wairarapa. The winds also closed roads and cut power across parts of the Southern Lakes and Central Otago.

At the end of the month, a number of areas had record or near-record highs or minimum temperatures.

What appears to be a tornado touches down in Mid Canterbury near Mayfield. Photo / Simon Baker

Wellington was lashed with strong winds and heavy rain on December 12, which forced Australian rockers AC/DC off the stage for 40 minutes due to power issues. Canterbury bore the brunt of the extreme weather the next day, as wind brought down power lines, lightning strikes caused fires, and thunderstorms brought tornadoes, heavy rain, hail storms and flooding.

A week later, Canterbury sweltered through a heat wave of record-breaking temperatures.

Outside of a week of chilly overnight temps and a day of heat in December there was not much of what I would call ‘extreme’ weather.  NOT getting snow in winter, downpours in spring and heat in summer would be far more extreme.  Flooding of your house may be extreme if it’s your house, but there were few events if any that have seriously affected a large number of people and that are out of the ordinary.   Floods and ‘mini-tornadoes’ haven’t just been invented since global warming came to the fore.

The biggest event to me has been the slowest one, which has been the continuation of the below average rainfall.

Oh, and before I finish my whinge, taking max wind gusts would be far useful if they were from populated areas.  150kmh winds at Brothers Island or Pusegur are regular events and don’t mean diddly if no one is there.