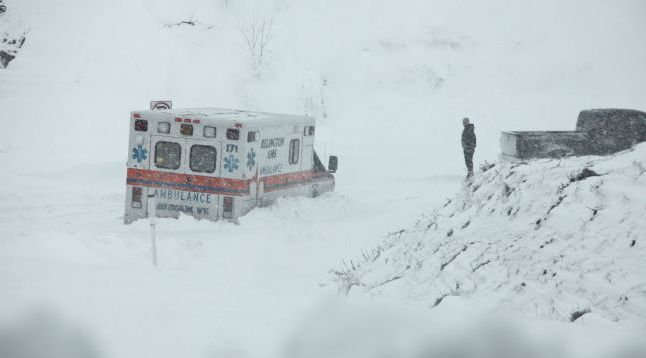 As we wind up our coverage on Sandy, Sandy continues to unwind over the interior regions of the northeast United States.  It is still weakening, but strong and gusty winds continued about the northeast ¼ of the US mainland.  Rain and snow will linger for about another day as well.

Reports of fatalities continue to come in.  At last report 47 deaths on the US mainland are being blamed on Sandy.  In addition, Sandy is blamed for 69 deaths in the Caribbean and 1 death in Puerto Rico.

JFK and Newark airports are now open.  LaGuardia airport, which actually had water over the runways at one point, remains closed.  The NY Stock Exchange was open today.

One of the things that powered Sandy was the availability of cold air.  As an extra-tropical cyclone, Sandy used the extreme temperature differences between the cold polar air and the warm tropical as fuel.

The cold air is now being spread across the eastern United States, including in places that don’t have power.  Morning lows down in the lower 30s to around 40 F (0 to 4 above zero C).

Reports of 60 cm of snow were common in the mountains of West Virginia and the western regions of the state of Maryland.  The heavy, wet snow and high winds has led to numerous additional power outages.

3 deaths in West Virginia are being blamed on the snow.  Two of those deaths were apparent heart attacks brought on by storm-related clean up.

Early estimates put the total storm damage from Sandy at $50 Billion USD.  However, that number will likely go higher.

By WeatherWatch.co.nz Weather Analyst Howard Joseph with information from The Weather Channel and CNN