Wow – Why is this South American town the ‘most lightning struck place on earth’? (+PICS; VIDEO) 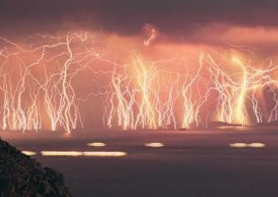 But as nature constantly proves, that is untrue. And it’s especially untrue in Venezuela, where a particular spot on a particular lake attracts 1.2 million lightning bolts a year.

This electric spot, where the Catatumbo River empties into Lake Maracaibo in Venezuela’s far northwest, is believed to be the most lightning-struck place on Earth.

And the spectacular phenomenon may even be responsible for Venezuela’s independence.

For generations locals have been captivated by the region’s dramatic light show, with lightning storms raging for about 10 hours a night, about 260 nights a year.

Now, more and more intrepid tourists are flocking to the spot to witness it for themselves.

But what on earth is happening here?

While the Catatumbo River attracts an unusually high number of lightning strikes, there is nothing particularly unusual about the thunderstorms themselves – they’re the same kinds of storms that rumble all over the world.

It’s the frequency and concentration of the so-called RelÃ¡mpago del Catatumbo that is weird.

Decades ago, it was believed uranium deposits in bedrock attracted the lightning. Later, scientists suggested the air above Lake Maracaibo had enhanced conductivity because of methane from oilfields below.

Humidity has been thought to have played a role, as the longest recorded pause of lightning activity, in 2010, coincided with a severe drought in Venezuela caused by an El NiÃ±o weather event. Others said that hiatus was caused instead by nearby deforestation.

Lake Maracaibo basin is surrounded by mountains that trap warm winds coming off the Caribbean Sea. When these winds collide with the cool air coming down the Andes mountains, they are forced up until they condense into thunderclouds.

“A lot of the (lightning) hot spots are tied to features in the terrain – slopes of mountain ranges, curved coastlines, combinations of those,” Dr Daniel Cecil from the Global Hydrology and Climate Centre’s lightning team told the BBC.

“Having irregularities like that in the terrain can help generate wind patterns and heating or cooling patterns that would boost the likelihood of thunderstorms.”

The region is thought to be the world’s biggest producer of ozone – making it a significant player in the regeneration of the ozone layer.

The Catatumbo Lightning; the most persistent thunderstorm of the world. Up to 20,000 flashes of lightning per night. pic.twitter.com/7sxuGfnfAT

The storms are at their most spectacular at the peak of the wet season around October, and ease off in the drier months of January and February.

When they are at their most intense the flashes of lighting can be seen from about 400km away, which is why it has historically been used as a handy navigation aid for sailors.

The bright lightning bolts may have also helped foil two attempts to invade Venezuela under the cover of darkness.

In the first attempt, in 1595, ships led by British seafarer Sir Francis Drake were exposed while trying to launch a surprise night-time attack on Spanish soldiers in Maracaibo. The thwarted invasion was enshrined in the 16th epic poem La Dragontea.

The second attempt came during the final days of the Venezuelan War of Independence, when Spanish soldiers tried to sneak onto the shore at Maracaibo in a bid to reconquer the country but were betrayed by the bright flashes of lightning.

The Spanish forces were then defeated by Venezuelan independence hero Simon Bolivar’s fleet in the crucial, final battle of the Spanish American wars of independence.

Two years ago, Venezuela entered the Guinness Book of World Records for the most lightning strikes per hour, bumping the Congolese town of Kifuka out of the top spot.

There have been campaigns to have the region listed as a UNESCO World Heritage Site.

Visitors can join guided night tours to witness the spectacle of Catatumbo’s so-called “everlasting storm” and explore the tropical savannas nearby.