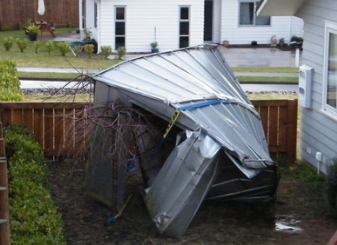 A Te Awamutu family scrambled into a small bathroom to take cover as a tornado roared through their property last night.

Daryl Ritsema is this morning recovering from a terrifying few minutes when a quiet evening at her Laurie St home was violently disrupted by a twister.

She said she and her husband Peter were sitting in the warmth of their lounge when their brightly burning fire started spewing smoke and embers into the room.

“There was a big noise like a freight train and the fire starting blowing out.

“There was soot coming out everywhere and the room was filling with smoke and little embers were flying everywhere.

“Then there was this big bang.”

She said she had a fair idea a tornado was about to strike.

“I went running to the kids and said, ‘quick, quick, into the bathroom’.”

She raced to open windows on the far side of the house before joining her three adult children in the safety of the central room.

“It just came out of the blue like an almighty gust,” said Ritsema.

“It was worse than a freight train.”

She hastily grabbed clothes to put over her nightie and went outside to see a giant kowhai tree in their front yard uprooted.

The chimney had also been destroyed, breaking tiles on the roof.

The twister left a trail of damage in the neighbourhood, including lifting a garden shed over a house and dropping into a backyard.

A number of fences along Laurie St had also been flattened.

But it appeared the Ritsema property had borne the brunt of the storm.

Once everything had quietened down Ritsema’s neighbour pointed out the extent of the carnage.

“He said ‘your big tree is down and you’ve lost your chimney’.”

The Fire Service put a tarpaulin over the roof to prevent any further damage from overnight rain.

Ritsema said she had been afraid the lit embers from the family’s wood fire might have caused a blaze, but her husband had put out the fire as the tornado struck.

Everyone was shaken after their fright, she said, but she was thankful no one had been injured.

The tornado was part of system of gale force winds that are hammering the upper North Island this morning, and Auckland is now bearing the brunt of fierce gusts.

A boat nearly became a casualty of this morning’s blustery conditions after it broke its moorings near Westhaven Marina.

A police boat and bystanders on shore managed to save the yacht from being smashed onto the sea wall.

Gusts measuring 90-100km/h battered the city – but reached 128 km/h at Manukau Heads and the Hauraki Gulf.

Trees have been uprooted and the Fire Service attended more than 20 weather-related calls across Auckland and Waikato overnight.

Waves of squally showers swept over the island as the unrelenting westerly gales continued throughout the night.

This morning wind gusts of 72 km/h were recorded on the Auckland Harbour Bridge and the New Zealand Transport Agency has issued a strong wind warning for commuters crossing the bridge.

The wind was creating the worst havoc in Hamilton, Katikati and Gordonton.

A severe weather watch was now in place for southwesterly gales to hit southern New Zealand and Nelson later today.