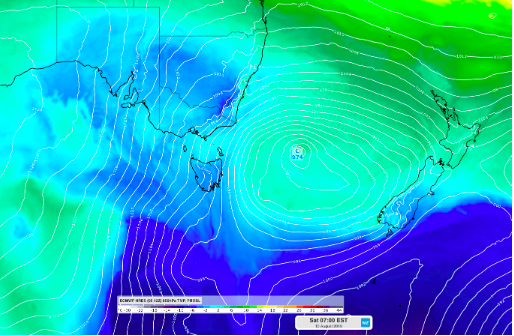 A series of cold fronts being driven by a deep low pressure system will cause rain, hail, thunderstorms, heavy snow, damaging winds and blizzards in southeastern Australia during the second half of this week.

A large pool of cold, upper level air surging out of the Southern Ocean will pass over Australia’s southeastern states between Thursday and Sunday.

This frigid air mass will cause a complex low pressure system to develop near the surface, which will produce four or five days of severe wintry weather.

The impending low pressure system and associated cold fronts are likely to affect parts of South Australia, Tasmania, Victoria, NSW, the ACT and southern Queensland. Weather warnings are likely to be issued in most of these states and territories during the coming days.

One of the standout features of this weather event will be snow, which is expected to reach low levels and become heavy in the alps.

Snow is likely to fall at the mainland ski resorts each day between Wednesday and Sunday, with the heaviest and best quality snow developing from Thursday into Friday.

This week’s burst of wintry weather should boost the natural snow depth in the alps to a new season high, with 50-100cm of fresh cover likely at some resorts.

Snow is possible down to an elevation of about 500-600 metres in Tasmania, Victoria, NSW and the ACT from Friday into the weekend, although it’s too early to know exactly where and how much will fall.

Be sure to keep up to date with the latest forecasts and warnings during the coming days.