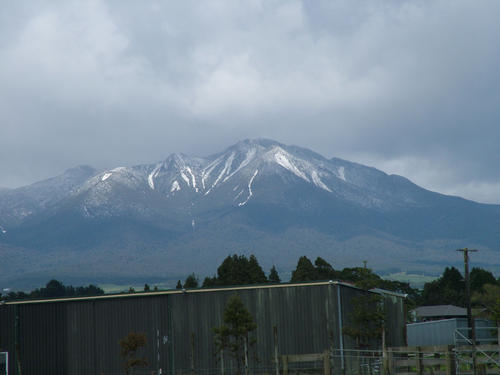 It might be mild across many parts of New Zealand today but a bitterly cold southerly is brewing predicts WeatherWatch.co.nz forecasters.

A large high now sits to the east of New Zealand, pulling down a warm, humid, north to north east flow over much of the country.  Temperatures were very mild overnight in the upper North Island with tonight expected to be even warmer, with a number of regions not dropping below the late teens.

“It’s hard to believe we’re a week out from May and temperatures are so high” says head weather analyst Philip Duncan.  “But we need to make the most of it because our second wintry blast in a week is on its way”.

Mr Duncan says a sub-tropical low is brewing and will bring heavy rain to northern New Zealand for Anzac Day/Easter Monday but a storm in the Southern Ocean will fire up a bitterly cold southerly at the same time.  “On Monday this very cold southerly will blast out of the Southern Ocean and reach the lower North Island by the end of the day.  On Tuesday it will move into Auckland and northern new Zealand as a strong, cold, south easterly”.

“We’ll have sub-tropical rain in the North Island and a wintry southerly advancing northwards in the South Island”.

WeatherWatch.co.nz predicts snow to several hundred metres in the South Island and highs on Monday in Dunedin and Invercargill may struggle to even break double digits.

The southerly should hit Wellington by the end of the day.

For Anzac Day dawn ceremonies temperatures should be fairly mild over much of the country with drizzle or rain predicted in a number of centres in the north, with driest weather in eastern areas south of Gisborne.

Thanks for the forecast Phil, much appreciated.

I have spent a number of years living in Chch, and I have noticed that the rain and snow associated with most cold snaps tend to pass through in 12-24 hours. However, the worst winter storms – in terms of duration and precipitation – occur when a low of tropical or sub-tropical origin ‘collides’ with a polar cold change, and the resulting mix of cold and warm air produces a deep, powerful low that quite often can linger for days in the same spot, with the sub-tropical moisture producing lots of rain, and the polar air turning this rain to snow, sometimes to very low levels.

A couple of examples of this happening would be the Wahine storm, and the Big Snow of August 1992.

One question for you – do you think anything like this could happen this time? And is it a possibility that it will happen over NZ or is it more likely to happen over the open ocean east of NZ?

Thanks for your comment and question.  I actually thought about this when I was making those quotes and wondered if someone might ask!  In this situation the lows aren’t going to meet up.  We only have the cold front (associated with the Southern Ocean low) and the warm low in the north Tasman Sea.  So while we have two fronts meeting up they aren’t a true southerly system meeting a subtropical one (such as the day of the Wahine disaster).

The front from the south is packed with cold air but it is only brushing us.  By the time the sub-tropical low reaches the Southern Ocean it will be a different system while the current southern ocean low will be long gone.  in fact the this current subtropical low may die over NZ and not even make it south according to some models.  So not the "perfect storm".

With La Nina still active I wouldn’t be surprised if we saw some big snow dumps in May or June as these warm and cold air masses collide – but this cold front doesnt have much moisture in it and it will be only brushing us really.

Hope that all makes sense?!  It does inside my head!

Thanks Phil, much appreciated. Yes that does make sense.