Home > News > Wintry snap for some parts of NZ for Chr...

Wintry snap for some parts of NZ for Christmas & this weekend, lows near zero & snow on the mountains! 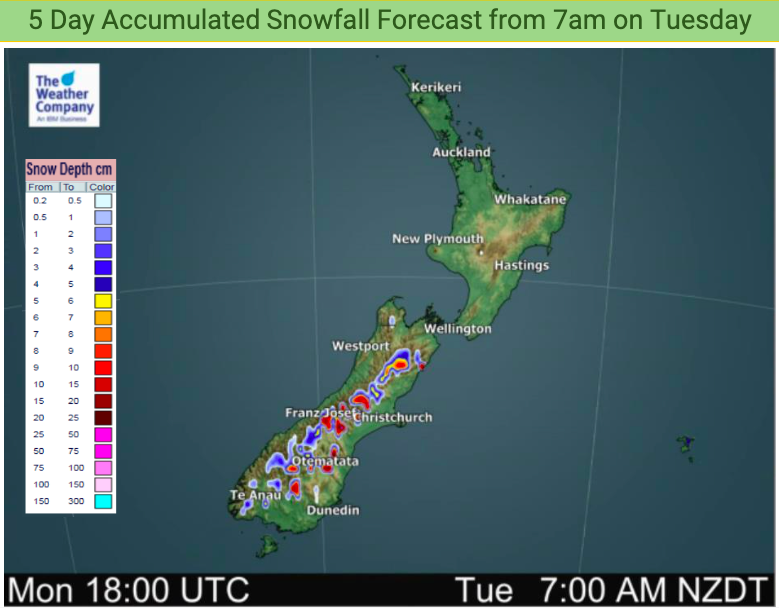 If the cold weather of a Northern Hemisphere’s Christmas appeals to you, then Dunedin or the Southern Alps may be the place to be this Christmas and Boxing Days, or this coming weekend.

Temperatures are going to drop well below normal as the still-active-Southern-Ocean continues to churn out weather disrupters.

It was the Southern Ocean that broke with the La Nina set up for the first two weeks of December bringing plenty of windy westerlies. Now, at Christmas time, they’ll be pushing in cold southerlies for a time.

“If this was mid-winter we’d probably be looking at a major cold event but because it’s early summer it will only make snow on the mountains and temperatures will be close to freezing but will likely fail to reach 0 anywhere populated” says WeatherWatch head forecaster Philip Duncan.

As much of 10 to 15cms of fresh new snow looks to dust the peaks and main ranges of the Southern Alps and surrounds over the next few nights. The snow level won’t be low, at around 1500 metres on Christmas Day and Boxing Day. (The Remarkables around Queenstown are 2300m above sea level).

TEMPERATURE DROP!
Dunedin’s high on Friday, Christmas Day, will be between 12 and 14 degrees. By Boxing Day some parts may only make it to 9 degrees, other suburbs up to 11 or 12. The wind chill may make it feel even cooler though.

Invercargill looks to cool down with Friday afternoon in the low teens and Saturday hovering around 12 to 14 degrees at the warmest part of the day.

Wanaka has an overnight low of 6 degrees on Christmas Night and a high of Only +12 on Boxing Day.

While the cold change fades out into the North Island those in Wellington may have more reason to complain about weather conditions. The next 10 days shows a mostly cloudy, sometimes showery, run of weather again. This coming Sunday and next Monday look coolest with the Capital forecast to reach 15 or 16 degrees only.

Some overnight lows in parts of Southland will be closer to FREEZING this weekend with lows of +3 in Gore and Lumsden and even Dunedin gets down to +6. At least three nights will be colder than normal from Christmas Day onwards.

It won’t be until sometime next week when the warmth start to properly return to the south.

To drill down with temperature graphs – including the humidex and wind chill calculators, head to www.RuralWeather.co.nz!