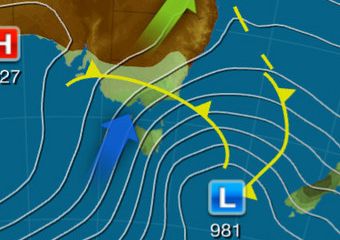 Melbourne has seen some of its coldest weather of the year over recent days, with a maximum of just 14.8 degrees on Thursday and a chilly start of 6 on Saturday morning.

Rather than being a brief taste of winter, it is simply a forerunner to a week of numbing cold.

Sunday afternoon and evening is when things will start to really go downhill for Melbourne. A cold front will surge in from the south, delivering a burst of icy winds and showers. It’s even going to become cold enough for snow for Alpine resorts on the southern side of the Dividing Range, such as Mt Baw Baw.

The showers will mostly dry up for Melbourne on Monday, becoming confined to the Gippsland districts. However, bitterly cold southerly winds will continue through the city and suburbs, keeping the maximum temperature to 15 degrees.

Tuesday morning is going to be another tough start for those rising around dawn, with a forecast minimum of 7 in the city. The arrival of yet another front during Tuesday afternoon will bring another burst of showers, blustery winds and snow to the Victorian Alps.

This pattern is set to be repeated on Wednesday and Thursday, so have your heaters and winter clothes ready.