Windy weather returns this week – but not for everyone 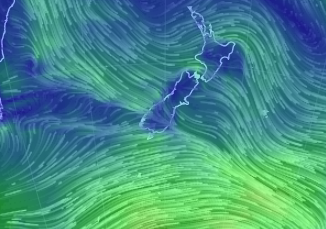 Westerlies will today increase across the country although significant issues are not expected with peak winds well down on the gales that hit New Zealand last week, says WeatherWatch.co.nz.

Over Monday and Tuesday winds will increase – but mostly around Wellington and Cook Strait area, plus eastern inland parts of the South Island.

High pressure in the Tasman Sea this week will also stretch over the upper North Island at times – putting a ‘lid’ on the strong winds for northern New Zealand.

“This means windiest weather this week will be around the South Island and lower North Island” says head weather analyst Philip Duncan.

Gales may affect Wellington on Tuesday morning but damaging gusts are not expected.  Rain will also pass through the Capital on Tuesday morning with both wind and rain easing by Wednesday. Windy weather is also expected around Marlborough and inland Canterbury.

Wednesday and Thursday are calmer with high pressure pushing into more regions.

On Friday a high dominates much of the North Island but strong winds return to Southland, Otago and inland Canterbury and Southland getting the strongest winds.

This weekend:  Blustery nor’westers for central and southern New Zealand, with lightest winds the further north you go.