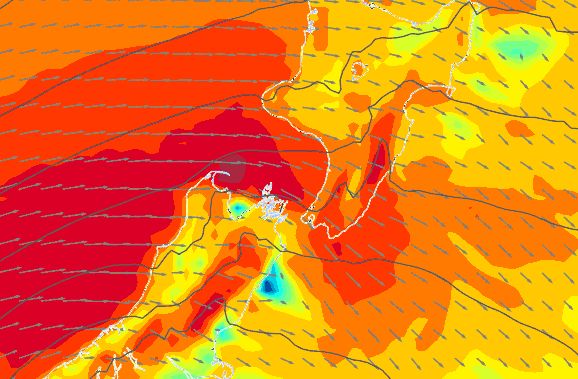 A low over Stewart Island and a high just north west of us are pushing up together today to make a squash zone around central New Zealand – in other words, where the winds are strongest.

Across today gusty north to north west winds will push further into the North Island boosting temperartures in eastern areas like Wairarapa and Hawkes Bay and Marlborough in the upper South Island to name a few.

Northerlies are likely to reach gale force around Wellington and surrounds but severe gales are not in the forecast for populated places.  However winds may exceed 100km/h in exposed hill tops and some highways – motorists around Wellington and Wairarapa especially are advised to prepare for strong gusts.

This evening the windy, warm, weather moves further north across Hawkes Bay and Gisborne – winds will also build in Bay of Plenty and Auckland as the day goes on.  Blustery conditions are also expected in parts of Taranaki.

Winds will gradually ease on Sunday but could return again later on Monday for Northland.  Gales are not predicted then.

Late September, all of October and early November tend to be New Zealand’s windiest months, which is all very normal for the middle of spring.

Currently I can see it is 1:30pm in Auckland , and winds are definitely building up similar to what weather watch did say “This evening the windy, warm, weather moves further north across Hawkes Bay and Gisborne – winds will also build in Bay of Plenty and Auckland as the day goes on. Blustery conditions are also expected in parts of Taranaki “. And also some Showers were seen , just a little though , so it is a accurate information by weatherwatch , I would love to know what other people like in hawkes bay and gisborne and other areas are seeing . To me the low that recently left nz , this sounded to be a big low which I mean whole of NZ is I can see NZ radar but as it went past it calmed down as expected by weather watch , so yes I think rather than a subtropical , it was a kind of stormy weather , where winds were seen but also rain ,. So I think a Sub tropical storm .I do like to say that im not a professional or anything like that but yeah that’s my opinion , I do like Philip Duncan , he does a great job , keep up the good work .