Home > News > Windy weather and heavy rain in the west... 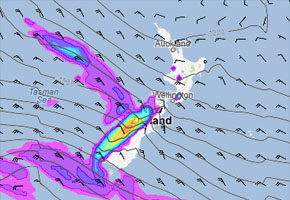 At the moment over New Zealand there is a strong west to northwesterly airflow and it is likely to last through to the weekend when winds change more west to southwesterly on Sunday, this is the result of an anticyclone to the north of the country and depressions in the southern ocean. During this time westerly quarter winds could reach gale force in exposed areas.

WeatherWatch.co.nz analyst Aaron Wilkinson mentions, “The likely candidates for these strong westerly quarter winds which will likely reach gale force at times will be about the coast in Southland, the Catlins, inland parts of Canterbury and Marlborough and also the lower North Island i.e. Cook Strait in particular”. Mr Wilkinson goes on to say that about the coast in Canterbury and Marlborough northwesterly winds are likely to be strong also during this period however they can ease off more often at times.

Heavy rain on the West Coast of the South Island looks likely also due to the westerly airflow, periods of heavy rain will develop tomorrow afternoon and it will last through till early Sunday when the flow changes more southwesterly. Rain may continue to be heavy about South Westland and Fiordland on Sunday and Monday finally easing Tuesday next week.

Mr Wilkinson says the West Coast could experience totals of up to 250 maybe 350mm from now through till Tuesday next week. Thunderstorms are likely on the coast also particularly later on Thursday then again early on Saturday and due to the shear and winds involved a tornado is always possible too during these times.