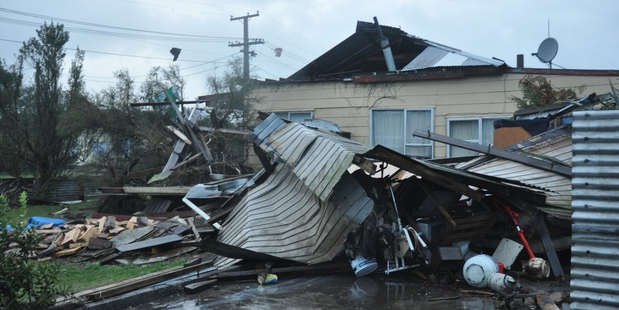 Destructive winds wreaked havoc throughout the middle of the country yesterday â€” with a tornado striking Greymouth, tearing iron off roofs and smashing buildings. Wellington was also buffeted, and flights were cancelled.

One West Coast resident described the height of the storm as “like a jet plane coming at you”.

Parts of New Zealand were deluged by intense rain and battered by strong winds as storm fronts moved up the country.

Wind gusts in parts of Canterbury were recorded at a damaging 130km/h. Marlborough, Wellington, Wairarapa and Taihape were also hammered.

The Fire Service attended five weather-related call outs in the capital. Shift commander Murray Dunbar said a roof lifted off a shed in Melrose and lines were brought down by strong gusts.

Wellington Airport was forced to cancel flights with major travel delays for travellers on regional routes.

“We’re still experiencing disruption due to the high winds,” a Wellington Airport spokeswoman said last night. MetService forecaster Frances Russell said the worst-affected areas yesterday included the Tararua Ranges, Mt Taranaki and the west of the central North Island including Tongariro National Park. MetService said the rain is expected to ease across most parts of the country today.

Greymouth will be clearing away debris for days after a tornado cut a destructive swathe through the residential suburb of Blaketown about 5pm. No one was hurt in the twister, but around 10 properties were damaged.

Homes lost roofs, windows were shattered and buildings extensively damaged when the violent twister touched down.

Doyle St resident Marcia Pera said there was little warning before the twister struck with such force her garage was destroyed and her home left in ruins.

“It flattened the garage and made a big tree fall into our home, smashing the sliding door and taking out half the roof.”

She said as the twister roared over them she screamed to her family to run into the hallway.

As the twister funnelled over the family home she heard building material tearing as the house was ripped apart.

Pera said it’s the second time in 10 years her home had been left uninhabitable by a tornado.

Fire crews from Greymouth, Runanga, Cobden and Brunner were called in to deal with the “extensive damage”.