Will ex-cyclone Fina even reach us? 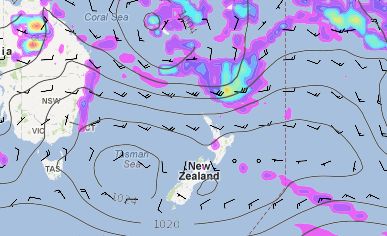 A big question mark remains over what the weather conditions will be like for the end of 2011 and the start of 2012 as the remnants of ex-cyclone Fina continue to slowly drift our way.

While we’ve known for the past week that the tropical low would eventually work its way towards New Zealand waters, a significant question mark has remained as to whether or not the low would bring a wet end to the year or instead narrowly miss us.

WeatherWatch.co.nz says the latest models show a strengthening high over the South Island pushing into the North Island towards the end of the year but there is still significant uncertainty surrounding a five day period that starts around Dec 29th.

So what are the models saying?

WeatherMap.co.nz (who provide all our maps) – have started to back off from their earlier rain predictions, suggesting that the high over the South Island may be strong enough to push north and stop the serious rain from putting a dampener on New Year celebrations.

European forecaster ECMWF, who produce international models and are highly respected around the world, show the low drifting over the upper North Island and stalling for a number of days.  While they have a great accuracy record for deep lows and tropical cyclones, they can be a bit vague when it comes to NZ specifically.

Meanwhile another respected global model out of the US, called GFS, tends to back the WeatherMap models – also showing the high ‘killing off’ most of Fina’s remnants – while a new low from the Coral Sea could merge up with it and drift down our way in the New Year.

So there is still a question mark over weather conditions for New Years eve and day for the North Island but South Islanders are still looking mostly sunny and dry.  Good news for most, but dairy farmers will be praying for some rain soon in the deep south, which is starting to significantly dry out.

We should start to have a more concrete prediction in the next day or two.

– Homepage image / is this how NYE will look weatherwise? Forecast map by Weathermap.co.nz

It will hang around till Tuesday or so.. So plan on a wet New Years Eve, especially in the upper North Island..

GFS is now plotting it stalling over much of NZ for days.