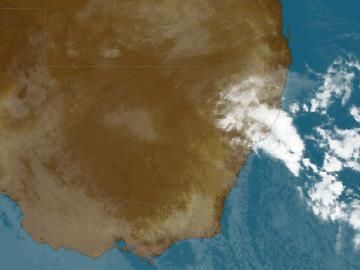 A deepening low pressure system swept north up the NSW coast on Wednesday morning, delivering some extreme winds to Sydney and heavy showers to Newcastle. These winds also whipped up huge seas and brought a significant wind chill factor.

The low responsible for the wild winds formed off the South Coast of NSW on Tuesday night, before sweeping north past Sydney during the early hours of Wednesday morning. The strongest recorded wind gusts near Sydney were 109km/h in the Royal National Park and 91km/h at Port Botany. Gusts of over 70km/h were recorded in the city and at the airport.

These winds brought a rapid increase in wave heights to the Sydney coastline, with average wave heights exceeding 4 metres and maximum wave heights jumping past 8m.

The wind chill factor was also significant. At 9.45am, Sydney was around 12.5 degrees but the wind chill was giving an apparent temperature of just 2.5 degrees!

The highest rainfall in Sydney up until 9am was 27mm at Bondi. Heavier falls of over 70mm hit Newcastle, while there was a whopping fall of 144mm near Merewether.

The wild weather will edge further north this afternoon, with a gradual easing in conditions for Sydney.