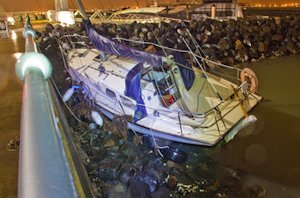 Nor’easterlies up to 85 km/h broke boats from their moorings at Okahu Marina with at least one boat ending up on the rocks.

Road traffic also felt Mother Nature’s wrath when heavy rain combined with waves breaking over parts of Tamaki drive and caused some flooding.  The treacherous driving conditions brought on by the heavy rain contributed to some road accidents which kept emergency services busy.  One accident involved seven cars and a truck on the Waikato Expressway near Pokeno.  It brought traffic to a standstill on State Highway 1.

An ambulance spokesman said no one was seriously injured.

WeatherWatch.co.nz Head Analyst Philip Duncan said the combination of whilst heavy rain and gale force winds were to blame, the wind direction just added to the problems since northeast winds mean rougher seas and bigger waves.  Mr Duncan says that’s because “It comes from an unusual direction, blowing in towards the rocks and cliffs fast”.

By WeatherWatch.co.nz Analyst Howard Joseph with contributing information from NZHerald.co.nz