Where has winter gone!? Oh there it is – on Friday and this weekend… (+4 Maps) 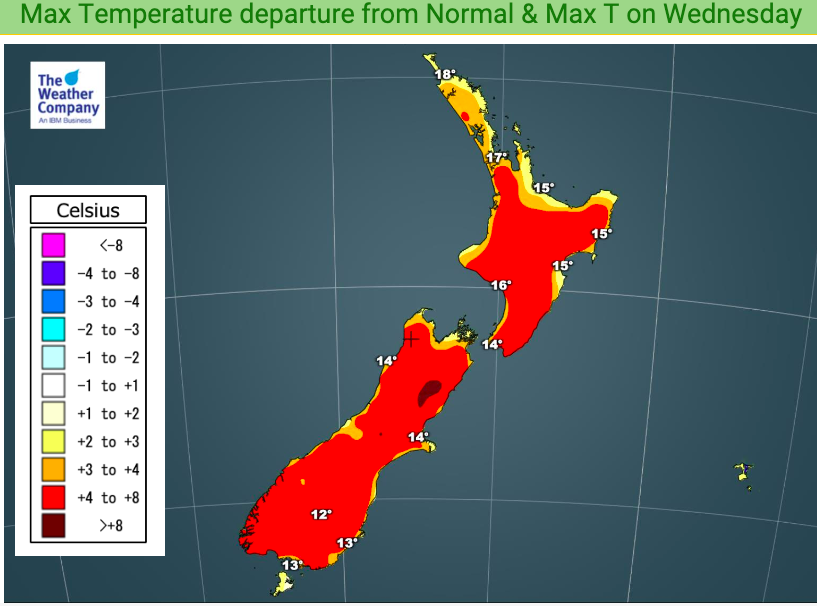 Parts of NZ are over 8 degrees above normal today, Tuesday and Wednesday as more mild winds from the north continue to move down over the country. Thursday also looks milder than usual in many regions.

High pressure to New Zealand’s east is the main reason we’re getting milder winds – then a low in the southern Tasman Sea later this week will enhance the north to north west flow for a time too.

But this incoming low will also bring a temperature reset to the nation by the end of Friday, meaning this weekend will be colder than last weekend was by a few to several degrees nationwide.

The wintry change late this week and weekend won’t be too brutal in historical terms – and many regions in the east and north east of both islands may still have average temperatures and sunshine. But there will be a cooling down everywhere and for some places gales and squalls will combine to make it even more wintry. See your local 10 day forecast for more details and timing.

Early next week there is another surge of cold air, this time in the south of the South Island and may well slide up eastern NZ.

Daytime highs will drop by a few to several degrees in many regions. But remember, this is how much warmer than normal things are now. So while a ‘wintry blast’ is on the way, it may not produce a lot of colder than normal weather during the daytime hours generally speaking.

But southern NZ will feel the pinch – daytime highs in Dunedin and parts of Southland this weekend and next week will only be between 5 and 9 degrees with snow flurries potentially down to just a couple of hundred metres in Southland for a time. For newborn livestock this event is definitely worth monitoring in southern NZ due to wind chill.

WeatherWatch.co.nz says more mild winds look set to return from Wednesday next week, likely ensuring this cold event only runs from this Friday to next Tuesday.