Where Celsius and Fahrenheit meet 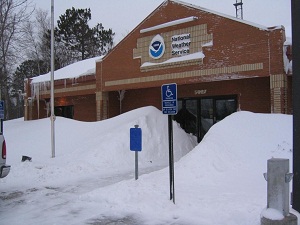 I grew up in St. Paul, Minnesota, USA.  It’s been called the “Frozen Tundra”, “Minne-SNOW-ta”, etc.  It’s about as far away from the equator as Timaru.  But, thanks to the fact that it is surrounded by thousands of kilometres of land rather than water, it gets very cold.

Well, on more than one occasion in the middle of winter, I would awaken to find our pre-sunrise temperature to be as low as -40, and that’s without wind.  That’s so cold; there is no difference between Fahrenheit and Celsius.  That’s where the two scales meet.

But that’s an extreme.  That only happens once every few years.

It’s on mornings like that you wake up and wonder if you will be late to work because your car won’t start.  Even if it does start, you have to let it run for a good 10 minutes to warm it up.  Unless, of course, you keep it in a garage.

The cold is only one part of what makes Minnesota winters famous.  The snow is amazing.

But we Minnesotans are a hardy bunch.  We learned to live with the extreme cold and extreme snow.  Even enjoy it.  In fact every year, the snow and cold are celebrated with during the St. Paul Winter Carnival.

Now that I live here in New Zealand where the climate is much more moderate, I almost miss that extreme stuff.

Despite that month of living below zero I found the late summers in St Paul even more extreme with all the humidity, tornado sirens, green clouds and trips to the basement. When I first got there they said “No one ever leaves…. It was like a threat. But us kiwis are made of harder stuff wegot out after a couple of winters.

I was born & raised in Miami. Some years, my grandfather would come down from 6ft snow drifts in Pittsburgh and freeze in Miami b/c of the “damp cold”. Some years it was cold, others not so much. Lived in Atlanta for 10 years and had the ice problems along with snow. I don’t miss that cold at all. I did want to go to Minneapolis to see the 6 miles of covered, heated walkways that connect the buildings. I think that might make it worth going there in winter! Then, of course, the Mall of America.

The cold in the South Island can be very bitter here. I froze in Queenstown one year. The hard thing in Auckland is that it does get pretty chilly here but the houses aren’t built for it. I miss central air/heat.

I remember when they were first putting the Skyway system together back in the early 1970’s.  I was just a little kid at the time, but I remember all the grown-ups being so excited about this novel idea.

And really, it’s a wonderful system.  I used to have to walk from one end of Downtown Minneapolis to another to making a connecting bus back when I was a teenager.  That walk was sure a lot more pleasant indoors than out in the middle of winter.

I have been to Minneapolis, MN, but in July/August and the heat at that time was the other extreme. My word was it hot!!! It hit me like a wall when I went outside, away from the air-con. I was interested to realize that I was as far north there, as NZ is far south, and also that I was in the middle of what used to be the American prairie.

Yes, Minneapolis can get very hot.  But the flow of hot air also has plenty of moisture with it.  So air temps of around 40 C can turn into feeling closer to 50 C.  That’s pretty extreme for Minneapolis but it has happened.

I grew up in St.Louis Park, Minneapolis and remember going to school in the snow – it was really cold.That said, one acclimatizes to new places and winters, and I am often “cold”. Weird, isn’t it?

I know what you mean.  I moved to Arizona for a year before coming here to New Zealand.  I would get cold when the temperature dropped to 4 C.  That was short-sleeve weather back in Minnesota.

I also lived in St. Louis Park.  In fact, that’s where I went to high school.  I remember one morning in December 1983, walking to school with an air temperature of -36 F and a wind of around 35 mph.  Using the wind chill formula at the time, that was a wind chill of -101 F.

Seen some amazing ice sculptures from your hometown. Did you ever make one?

No, I never did.  It scared me to watch them with their chainsaws…LOL!

But yes, some off the ice sculptures has been breathtaking.