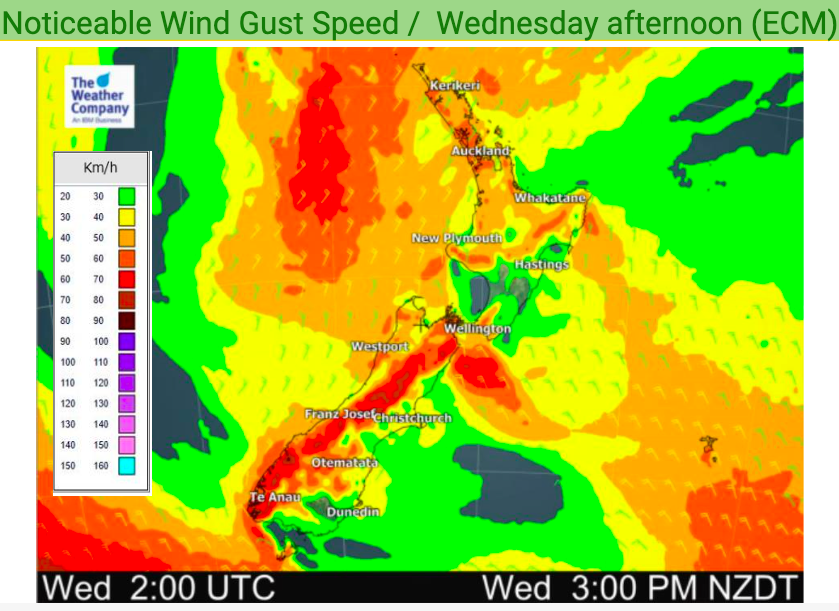 A humid northerly flow is spreading across New Zealand with sub-tropical connections.

Low cloud, rain setting in, hotter weather inland and in the South Island. Tonight will be a warm night with some places having overnight lows very similar to their daytime highs in the north where humidity and low cloud keep it a little cooler by day but then locks in the warmth at tonight.

The sub-tropical northerly flow covers most of NZ and may be a little windy in some areas, like Auckland and the upper North Island, also around the Southern Alps.

Here are the regional forecasts for Wednesday – Remember for hyper local and up to date hourly weather data see your local forecast at WeatherWatch or RuralWeather.co.nz.

Eastern North Island
A mix of sun and cloud. Might be a shower in the ranges later. Light northerly quarter winds.
Highs: 23 or 24

Wellington
Cloudy and possibly a shower or drizzle patch. Humid Northerlies.
High: 16 or 17

Marlborough & Nelson
Calm or light winds from the north and cloudy. Rain at times around Nelson with some dry spells possible – but maybe some heavy isolated falls, especially at night. Drier weather in south eastern Marlborough.
Highs: 19 – 21

Canterbury
Cloudy in the north and sunny spells in the south. Dry at first but might be an afternoon shower inland. Warm northerlies, hotter inland especially if the sun comes out.
Highs: 19-27

West Coast
Low cloud and humid with showers or areas of rain. A few heavy falls possible here and there. Northerly quarter winds.
Highs: 18 or 19