Home > News > When will this wind end? Our early Augus...

When will this wind end? Our early August outlook hints at repetition 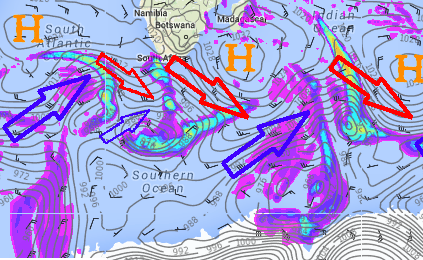 WeatherWatch.co.nz has renamed this season “Sprinter” due to the windy, generally warmer than average weather we’ve been getting this winter.  The spring + winter formula looks set to continue for the rest of July with mild weather in many places this week and a return to gale westerlies around Thursday and into the weekend.

This weekend true winter weather kicks in – on the final day of July (Sunday) a proper polar southerly is possible nationwide across the country for the first time this year. However just two days later – August 2nd – a high in the Tasman Sea will divert air from not only the sub-tropics, but also the Australian interior, and push this right across New Zealand.

So what is August looking like? Well, if we take the air pressure map for August 3rd, then go super-widescreen to encompass the entire Southern Ocean around the globe, along with South America, South Africa and Australia we can see what weather is coming in to New Zealand from the west going into the month of August and something jumps out – a pattern of repetition.  One big high after the other, perhaps slightly further south than they were in July.

Each high has a bit of a gap between the following high – this allows a cold front to come in.  This creates a bit of a chain-link-fence look to the weather map and means the isobars in the westerly flow move up and down in waves.

For New Zealand this can mean highs covering northern New Zealand from time to time with westerlies further south, then in between highs we have a cold front which brings a burst of westerly quarter winds – warm nor’westers changing to colder sou’westers with rain on the western side.

So yes, winter weather is certainly possible within the next week – but it looks as though the Sprinter Season will continue into August too.