Home > News > What to expect for tomorrow and the week...

What to expect for tomorrow and the week ahead 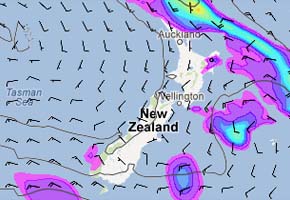 In the North Island it’s looking like there will be a few showers in the morning in western areas then easing off by midday with southwesterly breezes, there may be the odd shower hanging about western coastlines till evening however it should be mostly dry. Sunny breaks will develop in the afternoon. In the east it will be mostly sunny with light winds, a southwest change develops about Wairarapa around midday however moving through to Gisborne by late afternoon or evening. A few of these showers could be heavy with some hail in the mix.

At night skies will clear and it’ll become quite cool in most places as a ridge branching out from an anticyclone in the Tasman Sea moves over, frosts are possible in the Central North Island.

In the South Island it’s looking like a sunny day will be on the cards although not as warm as it has been the last few days in the east, winds will be light. About Southland and Fiordland however expect west to northwesterly winds, cloudy skies and the odd shower at times mainly in Fiordland by midday.

On Wednesday an anticyclone dominates our weather, skies will be mostly sunny however across Southland, Otago, and in Fiordland up through to Hokitika skies will be a bit cloudy with some drizzle or light showers at times as winds tend light southerly. In the evening those areas of precipitation will clear. Thursday is looking like a nice day for most although an area of low pressure this time moves towards Northland from the north, this will bring some cloud for northeastern parts of the North Island and showers north of about Waikato for a time.