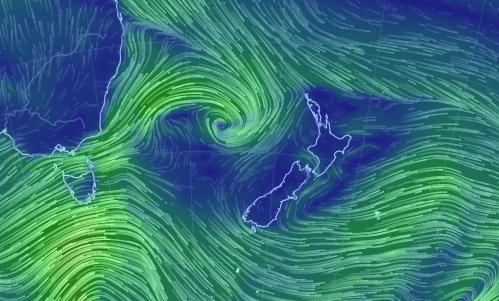 Looking at the satellite images at the moment, you can clearly see the major influence in our weather for the start of a new week – a big low pressure system sitting off the coast of the North Island.

That low will make landfall today, and brings with it the risk of heavy falls about Auckland, the Waikato and possibly making it to the Bay of Plenty.
The front will move across those regions in that order, with Auckland and Waikato in the firing line this morning.
Again, it’s not looking too severe at this stage but the risk is there.

Winds from the northeast will freshen along with the front coming through, and turn northwest later in the morning.
Those winds aren’t looking too rough, but they will be fairly strong, particularly the northwesters.

There is the low risk of some thunderstorm activity in Northland, but our forecast team here is expecting the system to weaken before it hits the country, and any storms will likely fizzle out.