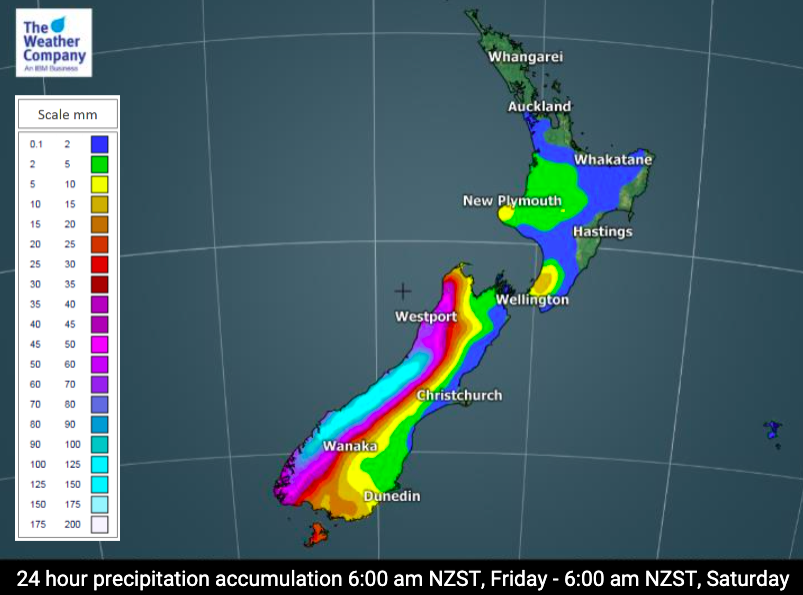 Slow moving heavy rain is expected on the West Coast from later on Thursday and not easing until the weekend. Rainfall totals exceed 200mm over the next few days in some locations, but it’s Friday that sees the heaviest rain with up to 150mm on Friday alone around the glaciers.

Franz Josef’s latest estimate is for 130mm on Friday and an additional 70mm in the surrounding days. Meanwhile the ranges above/near the glaciers may have 150 to 200mm on Friday.

Rainfall totals drop as you head north with Greymouth likely to get around 55mm on Friday.

The West Coast is no stranger to heavy rain but Friday’s deluge will be heavy enough to put pressure on streams/waterways and may result in some localised slips, flooding and potential road closures. The heaviest rain will also be further south than the more populated places – so visitors to the region have plenty of warning of heavy rain coming in.

In the North Island, wet weather around Gisborne finally eases today, with a further few mm in the forecast as showers clear.

You can see your local hourly and daily rainfall totals at both WeatherWatch.co.nz and RuralWeather.co.nz – NZ’s most accurate rainfall forecaster, powered by IBM.