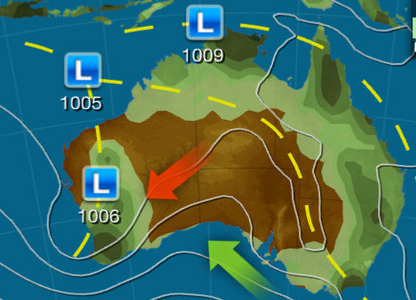 With a lingering coastal trough and developing low pressure system, the coming week is set to be soaking and thundery for many parts of the Queensland coastal fringe.

As the monsoon trough re-activates over the tropics in the coming days, heavy showers and thunderstorms are likely to intensify over the northern Queensland coast. As the trough deepens and moves south, heavy rain will begin to move south with it. The Townsville Coast is in for a wet Monday, while things get a bit more interesting further south from Tuesday.

The trough looks to be firmly positioned over the Central Coast during the week, with frequent showers and isolated thunderstorms expected between Mackay and Bundaberg. By Thursday, many areas are likely to have collected well over 150mm. A low pressure system may develop within the trough later in the week and move out to sea, generating even more moisture which will be directed to the coast by a high pressure system to the south.

The high pressure ridge will eventually strengthen and reduce the chance of rain and storms by next weekend, allowing many coastal places time to dry out into the following week.