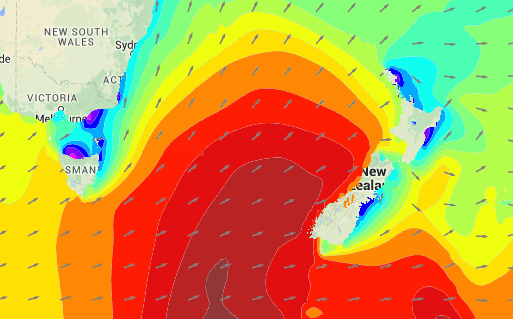 A brisk to strong westerly airflow sits over the country right now, a system which will strengthen over the southern half of the country in the afternoon and evening, affecting conditions for the South Island.

The east is looking better, with high cloud and and lighter northwesterlies which should strengthen in the late afternoon and into the evening.

Wellington and Cook Strait are again looking rough, with strong northwesterlies persisting and potentially gusting at gale force towards late afternoon and into the evening.

From Southern Taranaki through to Kapiti, strong winds will again blow from the west in the afternoon.

The east of the South Island is looking largely fine, with sunny areas and just some high cloud thickening along the coast.

Inland it’s looking windy, with northwesterlies set to gust at gale force in spells, especially in exposed places towards the evening.

On the opposite coast, Fiordlland is looking cloudy with rain developing in the afternoon, and then possible heavy showers spreading north up the coast in the evening.

Southland and Otago are looking mostly cloudy during the day, with Southland in particular looking wet.

Winds from the west and northwest will gust strongly at times during the day, especially on the coast.

please tell me we are going to get some warm dry weather soon ? I’m in the west of the North Island and there seems to be no end in sight to this cool , wet , windy weather.Will we ever get a summer ? I know its still spring but it usually not this bad.

Phil mentioned in a video a couple of days ago that this spring is fairly typical. The last two Novembers were quite dry with an early summer both years, so perhaps that gave the illusion of how this spring / summer may stack up. Not to be the case this year unfortunately for you and others.

Summer will hopefully come eventually, until then we just have to take what the weather gives us 🙂