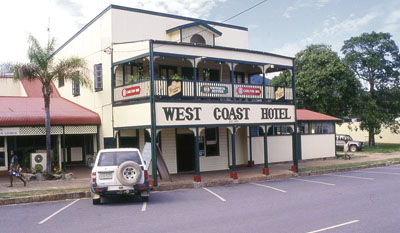 The landscape of parts of the West Coast has been drastically altered, with whole forests flattened, shelter belts collapsed and all the popular tramping tracks rendered impassable by last week’s massive windstorm.

Whataroa people say the landscape will never be the same in their lifetime.

“A lot of it can just stay and rot or some of it can be milled,” Dan Dennehy told Radio NZ.

Malcolm MacRae is also adjusting to an altered landscape around Whataroa.

“Until you see it, you wouldn’t believe it,” Mr MacRae said.

“Trees uprooted are probably a couple of hundred years old. The roots are so large. I’ve been here 55 years and I’ve seen nothing like it.”

He said totara, which had been left standing during farm clearance because of their aesthetic value, had tumbled and the landscape on the flats now looked like a “bomb site”.

At Hari Hari, Lindsay Molloy said pretty well anyone with substantial trees on their property had lost some.

He still had some shelter belt left, but generally it was the willows, not totara, that were still standing, he said.

The storm has also closed most popular walking tracks over a 400km length of the West Coast.

The Point Elizabeth Track near Greymouth, and Coal Creek at Runanga, are both closed due to extensive damage. South of Fox Glacier, the trans-alpine Copland Track is also closed. In Buller, the Inland Pack Track from Fox River to Punakaiki is closed.

DOC is also advising people to keep off the Heaphy Track – one of New Zealand’s `great walks’ – as well as the Oparara Basin tracks and the Wangapeka Track.

The Carew Falls at Mitchells was closed, and the Croesus Track was closed on the Barrytown side, but open on the Blackball side.

At Franz Josef, partnerships ranger Cornelia Vervoorn said the access tracks to the glaciers were open, however the Copland was closed due to excessive windfall damage along the first few kilometres.

“The car park toilet was blown away.”

He said winds and strong earthquakes brought about a cycle of “natural renewal”.

“Trees can’t keep growing – eventually they get big and unstable (and blow over), or die.”

Meanwhile, the Grey District Council has identified about 200 homes, mostly in Cobden and Blaketown, needing repairs as a result of the storm last Thursday.

Civil defence controller Stephen May said about 20 per cent of those had suffered extreme damage, but at this stage it was not known how many would need to be rebuilt.

“That will depend on negotiations between the owners and their insurance companies. We (the council) could say `that needs to come down’ but the insurance company might say `no, we can fix it’, so we will have wait and see,” Mr May said.

Where it was obvious that demolition or major restoration projects would be required, council staff had been meeting with the homeowners concerned and advising them of the processes involved and what would be required of them from the council.

The West Coast Hotel pic included in this story is actually in Cooktown, Queensland (yes Cooktown does have a west coast… of sorts).