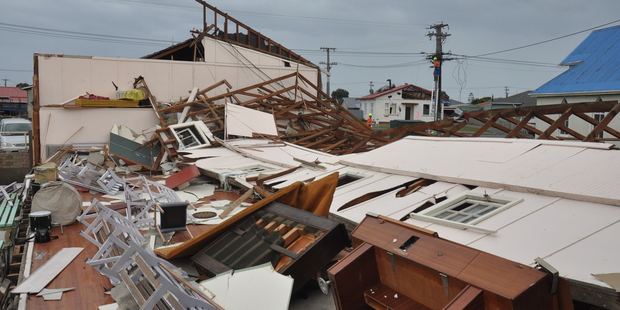 Builders and building materials are short supply with a mad scramble to patch up roofs left gaping after unprecedented windstorm cut a trail of damage over 400km of the West Coast, from Karamea to Fox Glacier.

The strongest gust recorded during Thursday’s storm was 130km/h, at Westport, although a Buller farmer claims his own weather station recorded 300km/h. The winds threw a campervan clean over a fence at Whataroa, scattered thousands of plastic discs from the new Greymouth sewerage scheme over several kilometres, and reportedly pushed over gravestones in the Westport Cemetery.

Grey District Mayor Tony Kokshoorn estimated that 60 Greymouth homes had lost their roofs – and some the trusses, too – and at least nine were probably write-offs.

He put the cost of the storm at between $10 million and $13 million.

Mr Kokshoorn was hoping to get insurance companies mobilised.

“We don’t want a situation like Christchurch,” he said, asking that insurance staff “hit the ground running” to avoid Canterbury-style delays.

Insurance Council chief executive Tim Grafton said insurers “should have enough staff to do the job”.

A busy Clark Ellery said the Ellery’s sheet iron store had operated all weekend, and started before breakfast yesterday, helping ensure that people had metal to patch up their roofs. They had already turned out 10 new roofs.

Evan Grooby, an owner of the private hangar that was destroyed at the Greymouth aerodrome, said one plane was completely smashed, and three substantially damaged.

Mr Grooby was on site about 7pm on Thursday when the building started to blow apart.

“It’s a bit of a kick in the guts, but we lost a shed full of toys – a lot of people lost their homes.”

The Greymouth Volunteer Fire Brigade had between 85 and 100 call-outs, and Westport 145, in the first 48 hours of the storm.

Westport fire chief Pat O’Dea said in his 52-plus years’ experience with the fire brigade he had never seen anything like it in terms of scale, or the length of time it lasted. “People have put acres and acres of trees and branches out on the footpath awaiting the council collection,” Mr O’Dea said.

Anyone who requires assistance with accommodation, or any other assistance, is being directed to Work and Income, while farmers in need of help are encouraged to call the West Coast Rural Support Trust on 03 738 0038.

Meanwhile, evacuating Westport’s Club Buller before gales ripped off the roof on Thursday may have saved serious injuries.

Researcher and social commentator Celia Lashlie was speaking to about 130 teachers when the roof began banging, said manager Kerry Duncan.

“We made the decision to go in and get everyone out.”

Within minutes of the evacuation, when only he and a staff member remained, the roof ripped off and ceiling tiles fell where the teachers had been meeting.

Some of the roof landed in the carpark the teachers had just left and the rest poleaxed the roof of a neighbour who had spotted the impending danger and also evacuated.

Mr Duncan called firefighters, who secured the debris but were unable to put tarpaulins on the roof because of the gale force winds.

TRT Builders and volunteers covered the exposed roof the next day, but heavy rain still got inside, he said.

With all the recent local footage available, I’m a little perplexed as to how a video of flooding in Far North Queensland nearly two weeks ago is relevant to a story about last week’s ‘unprecedented windstorm’ in the West Coast of NZ?

P.S. Greymouth Airport’s gusts to 141km/h on Thursday were higher than those cited for Westport.