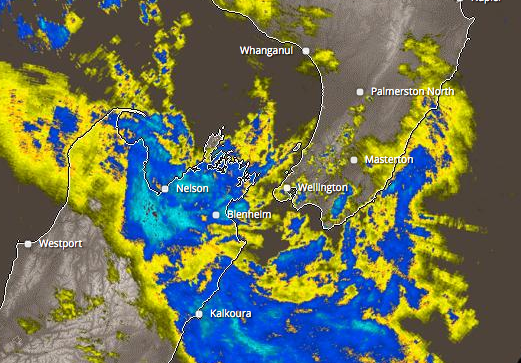 Floods have swamped Wellington, causing schools to evacuate and forcing residents to stay inside as severe rainfall pummels the capital.

Wellington City Council is being inundated with calls from people affected by flooding across the capital, as the downpours which have hammered the region show no sign of abating.

Porirua residents are being advised to stay at home as Porirua’s CBD has been overwhelmed by rushing water.

Fire Service crews are attempting to mitigate the heavy floods, and NZTA is advising drivers to take extra care through State Highway One southbound through Porirua.

Residents are reporting flooding on motorways and that roads are blocked.

Sixty to 100mm is forecast to fall on the area today, coming in bursts and expected to cease by 3pm.

The heavy rainfall is expected to make its way towards the Kapiti Coast.

Mana College, Porirua School and Maraeroa School have all been closed.

Porirua Mayor Nick Leggett said he was concerned more tumultuous weather could be on the way.

“We are worried at the fact that there could be another weather bomb, and we’re just asking that people report what they see, if they see flooding.

“And stay at home or at work if they possibly can.”

“I think the best thing is that people do stay away if they can until we know we’re clear of the rain.”

Porirua School Secretary Ali Steele is asking parents to urgently come and collect their children, if they haven’t already done so.

Maraeroa School has closed and parents are picking their children up after water entered school buildings.

A spokeswoman for the school said all children were safe, and the water began creeping into the grounds about 9am this morning.

She said the extent of the damage to buildings hadn’t yet been fully assessed.

At Mana College, access to the school is limited as the road leading to the entrance is completely underwater.

Buses in the city have been hit with delays and diversions as roads become submerged.