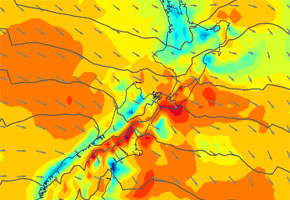 Tomorrow a northwesterly airflow will build over the South Island during the day pushing an anticyclone currently to the west of New Zealand northwards.

These northwesterly winds are likely to be quite strong about the lower South Island in inland areas from morning then spreading into inland Canterbury, Marlborough and Cook Strait from late afternoon or evening, northwesterlies may rise to gale force at times in exposed inland areas. Christchurch is more likely to have a northeasterly that won’t die out till evening when a northwest breeze then pushes in.

Rain develops about Fiordland in the morning and spreads north along the West Coast during the day with heavy falls at times. A few showers will affect much of the lower South Island during the morning also clearing in the afternoon, showers may persist in western parts of Central Otago till evening then clearing.

For the North Island the weather isn’t going to be as bad, expect westerly breezes with a mix of sunny areas and some cloud during the day. Hawkes Bay and Gisborne will have northeasterlies during the day however.

Sunday sees northwesterlies ease over the South Island, expect warm temperatures out east with some high cloud, some cloud and rain still for the West Coast. North Islanders will see increasing cloud with showers moving in between Taranaki and Wellington around midday then moving northwards to reach Auckland at night.

Winds will be quite strong from the northwest about Wellington and Wairarapa in the morning on Sunday, brisk westerlies spread to most North Island areas during the morning.