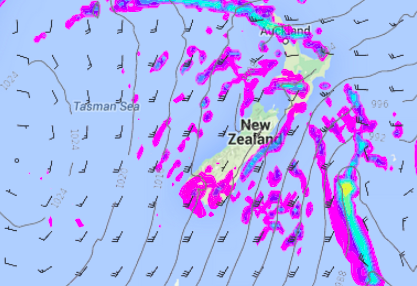 A deep low is expected to cross the North Island this weekend bringing more wind and rain – and as the low moves out to the east coast it will dredge up a cold southerly for most of the nation.

Spring is the season where winter slowly fades out and we slowly get hints of summer – so expect to get more mixed up weather patterns with sub-tropical, mild, wind flows one day and a colder southerly the next.

But unlike the middle of winter the cold events tend to be shorter lived – in saying that, with so many newborn livestock across the country we want to update you as best we can, as early as possible.

The Cold Forecast this Saturday and Sunday…

It looks cold but not sea level cold. Only slight chance to sea level is about Otago on Sunday, but that’s it.

However the air certainly looks cold on Saturday due to a southwesterly airflow over the South Island – but precipitation doesn’t appear to be very heavy and is quite scattered – ie, if it snows it won’t be set in for a day and will be patchy across the region affected.

In the South Island, generally Saturday afternoon/evening showers may contain small hail and perhaps some snow flurries to 400 / 300m. Maybe down to 200m about Southland / Otago. At this stage the early data suggests snow flurries will be isolated.

Sunday AM shows the strong south to south west flow over NZ – pink/blue/yellow shading are showers.  The far west of the map shows a large high coming in from the Tasman (the high to the left and the low to the right will work together to dredge up the southerly change…that same high will fade out the southerly very early next week).

Keep in mind – we are being very detailed a long way out and things may change – but we’re trying to give you a feel for this event so you can look into it further and plan accordingly.  Wind chills may be tough on newborn stock for a time, so if you can shelter stock over the weekend from the worst of the exposed winds that would be a positive, especially if you’re in Southland and Otago and around the Central Plateau.

So yes, a cold snap on the way but based on data and our latest forecasts at this stage it’s not looking too rough – perhaps more of an inconvenience.

Because the low over the North Island will be so changeable (as it will be deepening, growing and changing shape as it moves over us on Saturday and out to our east on Sunday) this will affect wind flows right across New Zealand and therefore will affect pricisely who is most exposed to the coldest air.  So we’ll have a more detailed update for you around Thursday.