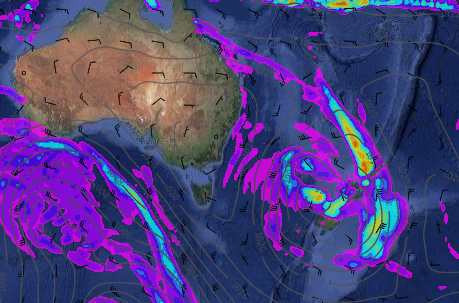 New Zealand’s second large low in a week is approaching and this one may affect more of the country with it tracking directly across central areas, unlike the sub-tropical low last week that only brushed the north.

Like last week, this big system isn’t a storm on its own but it may produce locally stormy weather (because our mountains and ranges increase rainfall totals, slow down rainbands and increase the winds for others – and this can then put conditions into the ‘severe’ criteria for some). For the most part this is another burst of wind and rain for some places, a fairly standard winter system.

Large lows also mean large areas of calm and dry quite often – as we saw with the system last week a big variety can come with these lows, including large areas of calm, dry and sun while neighbouring regions may have localised flooding or wind related issues.

But with this next low more likely to cross through central parts of New Zealand – and therefore affecting both islands  – people should stay up to date with any possible weather warnings.

FORECAST AT THIS STAGE:
Heavy Rain

This may shift around a bit – so we’ll keep you posted over the days ahead. In the meantime, the rest of the working week looks fairly settled around New Zealand with cold nights and mainly dry weather, although a few coastal showers do remain around both islands in a few places.

Totally different to Metservice. They’re saying easterlies/north easterlies. Nothing about ‘snow’ at this stage. Then again, it’s only you that seems to lower it to half of what they forecast for the far south, ie, 600m and you say 300m. I really don’t think anyone has a clue until the day is here. As for ‘a few showers’ for Invers today, they’re wrong again. You’d think by looking at the radar that they’d update though if we get a shower on a forecast fine day, they’re quick to change the icon for us!

If we said the same as MetService there would be no point in our existence! At this stage any snow looks short lived and in the mountains. 400 is the current level for possible snow but this may go up or down – we’re really only mentioning it for the alpine highways, certainly not for main centres. Latest data suggests the cold change won’t be too major, but a moderate risk higher up due to good moisture levels coming in, so worth mentioning. We’ll have daily updates to fine tune. Our 10 day Invercargill forecast has no mention of showers today and highs of around 9 or 10 degrees over this weekend, which isn’t very bad. We hope the independent review on public weather data means that rain radar can be used by other forecasters, as it is all around the world, as we’d definitely use it for your area and proudly!!

It appears that Metservice don’t look at the radar down here. (There’s been some sort of interference that looks like it’s raining inland and has done for weeks) They assume their rain maps are correct and forecast only by those. Look at the latest contradictory forecast for us tomorrow! $1 each way by the looks of it. Surprised we don’t have a shower icon yet…