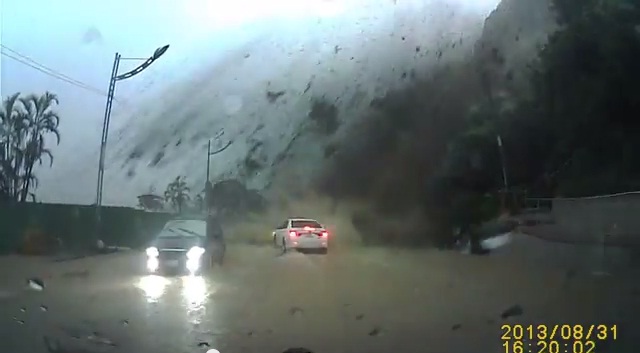 We started the week with a worrying story, about an enormous “mega canyon” discovered beneath Greenland’s frozen surface. At more than 450 miles across, it’s one of the largest canyons discovered in the recent past, and the method used to pinpoint its exact location can be seen in this amazing video from CNN.

Springtime is the wettest part of the year in some regions, and this Spring is looking like following the typical “unpredictable” pattern of kiwi seasons. There has been encouragement to put good rainfall to good use – with a step by step guide on building your own DIY water collection system – for simple, and free emergency supplies of water.

Staying in Asia, and the tropical storm which hit Taiwan has unearthed some more spectacular footage – this video showing just how close one driver came to total disaster, as a boulder very nearly crushes a moving vehicle.

Closer to home, and more than 300 skiers, snowboarders and students were stranded on Mt Hutt on Wednesday, after a sudden cold snap closed roads to and from the mountain. 20cm of snow over a matter of hours was the cause, and explosives were used to clear large parts of the road to allow access again.

And across the ditch, New South Wales, which has just experienced its warmest ever winter, is set to swelter again, with further highs predicted in the coming weeks. Farmers in some parts of the state are being forced to shoot stock, such is their condition – not even worth shipping to a meat processor.

Let us know what your week in weather has been like in the comments below, and watch this space on Sunday for a new weather poll.